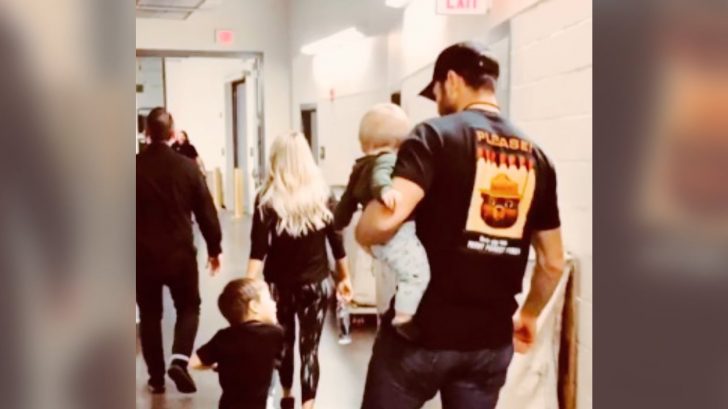 Carrie Underwood‘s Cry Pretty Tour is coming to an end on October 31, after the trek took the “Southbound” singer all over the U.S., Canada, and the UK.

Even though Carrie has been away from home for months, her family has been with her every step of the way. She brought both of her sons, Isaiah (age four) and Jacob (nine months), and her husband, Mike Fisher, has tagged along when he can.

Fans have loved seeing the photos of Carrie’s “boys” following her on tour. There haven’t been many pictures of baby Jacob, but Carrie has shared a few pictures that show Isaiah watching her shows with Mike.

One of my favorite things about the #CryPrettyTour360 is having my family out on the road with me. I just hope I’m making my boys proud of their mama. ❤️ #blessed #boymom #Wichita

Following her show in Pittsburgh on October 12, Carrie took to Instagram to share a photo from backstage. The picture shows her entire family, which is a rare thing, since she and Mike are selective when it comes to sharing photos of their kids, especially Jacob.

You can only see the backs of Carrie, Mike, Isaiah, and Jacob, but it is still a cute photo. The picture, which Carrie posted to her Instagram Story, shows Mike carrying Jacob while Carrie walks ahead.

As for Isaiah, he is seen next to his father’s side, following along on a skateboard/scooter. Carrie dressed up the image with an adorable “vroom vroom” animation next to Isaiah.

“How we roll…” she captioned the picture.

Baby Jacob has gotten so big! It won’t be long before both he and Isaiah will be seen zooming around on skateboards backstage.

It seems like only yesterday that Isaiah was as small as his baby brother. Carrie and Mike shared several of his earliest photos in a video package made to accompany her song “What I Never Knew I Always Wanted,” which you can watch below.