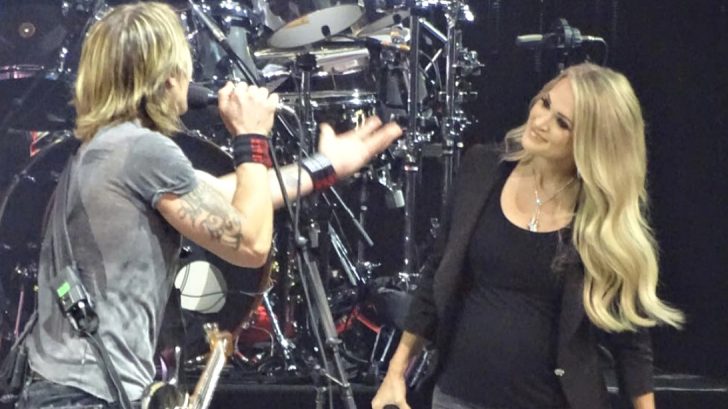 It’s been a few years since Carrie Underwood appeared on stage as an expectant mommy, and we had forgotten just how adorable she looks pregnant!

The “Jesus, Take The Wheel” singer announced a few weeks ago that she and her husband, retired NHL star Mike Fisher, are expecting their second child. She made the announcement in an Instagram video following the news that she will be embarking on her “Cry Pretty” Tour in May of 2019.

“You might be wondering ‘Carrie, why is your tour starting in May?’” she said. “Wellllll….YAY! Mike and Isaiah and I are absolutely over the moon and excited to be adding another little fish to our pond! This has just been a dream come true with the album and baby news and all that stuff!”

Since the news was shared of her pregnancy, fans have been on baby belly watch. Fans in attendance at Keith Urban’s concert at Bridgestone Arena in Nashville Friday night (August 25) were in for a huge surprise when Carrie made an unexpected appearance to join Keith for their award-winning duet, “The Fighter.”

Carrie looked adorable as she sang on stage in gray jeans, a black tee and a black jacket, her tiny baby bump on full display. Numerous fans captured photos of Carrie’s appearance and shared them on social media.

Carrie Underwood shared a clip of the surprise saying, “Will it ever suck getting to sing with Keith Urban? No. The answer is no.” The entire duet was captured by a fan and shared to social media.  Check it out below!