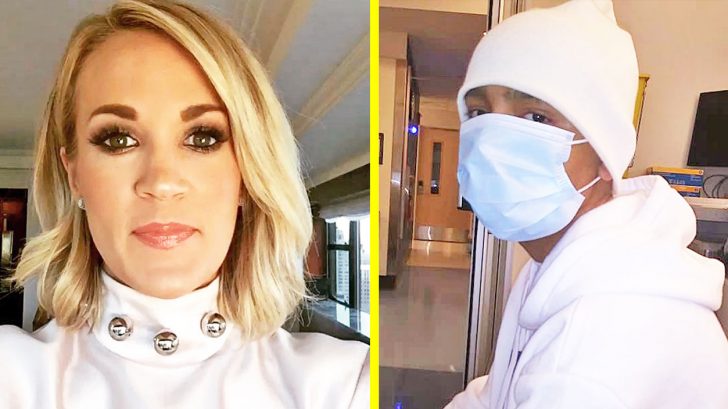 Over the course of the past few weeks, Carrie Underwood has been sharing photos and videos of fans who have been inspired by her new song, “The Champion.” Carrie joined a number of other writers to craft the song after the NFL asked her to create a new tune for the 2018 Super Bowl. That song became “The Champion,” which soared to the top spot of the iTunes songs chart on Super Bowl Sunday.

As of press time, “The Champion” is still sitting comfortably at the 11th spot on the iTunes songs chart. It’s sure to jump back up to the top again, as it is also being used in connection with the 2018 Winter Olympics, which are currently underway.

Many of the videos and photos that Carrie shared in relation to “The Champion” have showcased fans dancing and working out to the song. It’s obvious that the song is inspiring a lot of Carrie’s fans to get up and get moving! As a fitness enthusiast herself, you can tell that Carrie is getting a kick out of seeing these submissions from fans.

But the one image that seems to have inspired Carrie the most came from a woman named Belinda Werner. On January 15, Belinda shared a photo of her young son Coby, who is currently battling cancer. According to a Facebook event page set up for a fundraising event, Coby has been diagnosed with a rare form of Hodgkin’s Lymphoma.

Along with the photo she shared, Belinda wrote that Coby has been drawing strength from listening to “The Champion.” Belinda described the track by calling it “the perfect song for your son who’s battling cancer.”

When you find the perfect song for your son whos battling cancer. The champion. @carrieunderwood pic.twitter.com/PHe3cw57v4

Coby’s photo happened to catch Carrie’s attention, and she was clearly touched by his story. She shared his photo on her own Twitter feed, writing, “He is a TRUE champion!” along with the hashtag #Inspired.

Belinda also seems to be finding some encouragement through “The Champion.” A few days after sharing the original photo of her son, she posted a couple more of the two of them together in the hospital. She once again referenced “The Champion,” this time saying that the song was their “new fav.”

Nurse got a picture of me and Coby today. Must say its one of my favorites. Remember to sing dance love. Listening to our new fav The Champion. @carrieunderwood Inspired. pic.twitter.com/1bGhcrdXzn

If you happen to be in Pennsylvania and would like to help Coby, the Hurricane Pizza Grill in Columbia is hosting a benefit for him on February 24. Coby and his family will also be raising money for the Four Diamonds Fund, an organization that provides assistance to children with cancer, as well as their families.

A portion of the grill’s sales will be donated, as well as all proceeds from promotional items sold that night. There will also be a silent auction and door prizes will be available. You can learn more about the event by visiting its Facebook event page here.

Like Carrie, we too are inspired by Coby’s story and his remarkable bravery. Our thoughts and prayers go out to him and his family as he continues his battle against cancer.