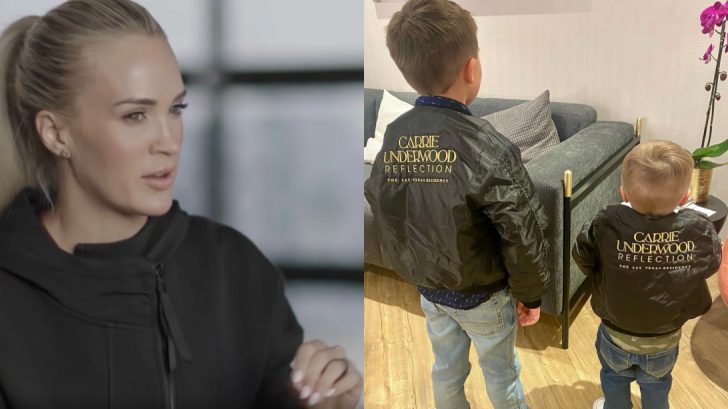 During a recent appearance at the Grand Ole Opry, Carrie Underwood’s boys stole the spotlight when they were seen at the back of the stage “breakdancing” as she sang a cover of Randy Travis’s “I Told You So.”

In a new interview with ET backstage at CMA Fest, Underwood addressed the now-viral video of her sons, Isaiah (7) and Jacob (3), saying that she had no idea that her kids were putting on a show of their own behind her.

“That was called, it’s way past my bedtime,” Underwood said. “The little one, Jake, he was just trying to not stop moving, because if he did, he was going to fall asleep, so, I’m singing a ballad up there and you also have this like, false sense of security at the Opry, when you’re back there, you’re kind of back there in the dark, and you feel like nobody can see you, so, I didn’t I feel like nobody really thought twice about them being there and acting crazy.”

She continued adding that her initial reaction to seeing the video was “ugh.”

“Melissa took video, ’cause I had asked her to take some pictures from backstage, and she took video of them doing it. You can see Isiah’s looking back, and Mike’s like..” as Carrie demonstrates Mike getting onto the boys by pointing and snapping his fingers. “And then Isiah’s like, ‘What?'”

The proud mom of two admitted that she may have some entertainers on her hands being that her boys aren’t at all shy, unlike Carrie who has admitted more than once that she is a proud introvert.

Underwood added, “I get nervous in crowds and in group settings and stuff like that.”

Thankfully, Carrie’s husband of 12 years, Mike Fisher, forces her out of her comfort zone every once in awhile.

“He’s got a million friends and we’re always hanging out with them. So yeah, I feel like we balance each other out,” she said. “I’m like, ‘We don’t need to go out all the time,’ so I pull him back a little bit. And then he’s like, ‘We need to go somewhere sometimes. Can we please interact with other people?'”

Watch the now-viral video of Carrie Underwood’s sons dancing below.

I took a few but this was the best one! ???? @carrieunderwood I never would have pictured ITYS being a breakdancing song but your boys stole the show! ?? pic.twitter.com/fzbAZsXx1t