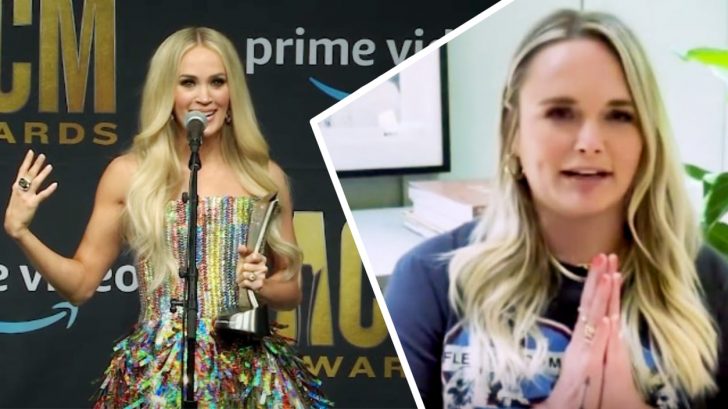 Luke Combs, Eric Church, Chris Stapleton, Miranda Lambert, and Carrie Underwood were all nominated for the ACM’s Entertainer of the Year award this year. Lambert won the award, but unfortunately wasn’t present to accept it in person.

Lambert was in London to prepare for her upcoming headlining set at the Country 2 Country music festival. She accepted her award over video call:

“This is my first time missing the ACMs in seventeen years,” she said. “My heart is a little broken, but I’m happy to be where I am. I’ve been waiting for this for a really, really long time. I actually never thought it would happen. But thank you so much to the country music family for embracing me all these years and continuing to support me.”

Lambert ended by dedicating her award “...to all the singer-songwriter girls out there that put their blood, sweat and tears into their guitar strings.”

Speaking in the press room backstage after the ceremony, Underwood shared what she thought about Lambert’s big win. Even though Underwood lost to Lambert, she had nothing but positive things to say about her “Somethin’ Bad” duet partner:

“It is alway wonderful [when a female artist wins Entertainer of the Year] because there are so many incredibly talented women in the genre, and Miranda is long overdue for winning this award,” Underwood said. “I couldn’t be more proud of her as a sister in this genre of music.”

Underwood didn’t walk away from the ACM Awards empty handed. Her and Jason Aldean‘s duet “If I Didn’t Love You” won Single of the Year. They performed the song during the ceremony, and Underwood made quite the entrance by descending from the ceiling on a metal ring.

Congratulations to Lambert, Underwood, and all of the other winners at this year’s ACM Awards!