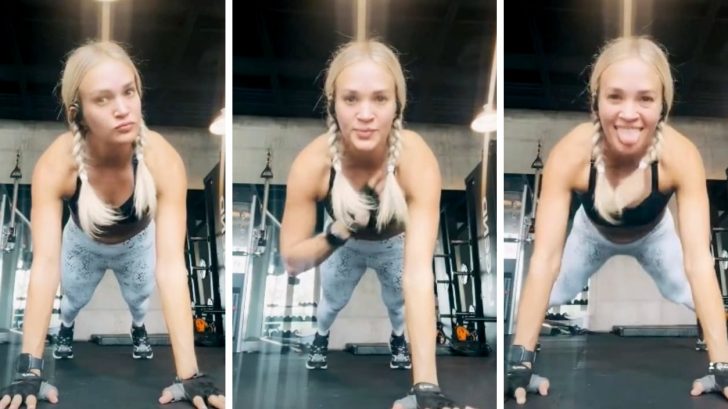 Carrie Underwood is a fitness junkie. She often shares photos on social media after her workouts, and encourages her fans to pursue their own fitness goals.

In addition, Underwood once had her own line of fitness apparel called CALIA by Carrie. She also has her own fitness app, fit52, through which she shares even more information about her exercises.

A post shared by fit52 with Carrie Underwood (@fit52)

Since Underwood loves anything to do with fitness, she’s been intrigued by some of the fitness challenges that pop up on TikTok.

Back in June 2020, she participated in a plank challenge “duet” with Kevin T. Edmonson Jr. Underwood’s followers were amazed to see how effortlessly she pulled off the many difficult moves in the challenge.

As of this writing, Underwood’s fitness “duet” with Edmonson has over 5.5 million views on TikTok.

If that wasn’t cool  enough, just wait until you watch the video of another fitness challenge Underwood tried.

Underwood first shared the video on her TikTok, which shows her doing the “Rock The Boat Challenge.” The challenge is set to the song “Grab Da Wall & Rock Da Boat” by 504 Boyz & Weebie.

Starting in a plank position, Underwood follows along with the song. As it says “left,” she lifts her left hand up and touches her shoulder. When it says “right,” she does the same on that side before repeating the moves.

After that, Underwood breaks out into a series of fast mountain climbers. Then, she finishes the challenge strong by quickly moving her legs in and out in a jumping jack motion while doing push-ups.

Underwood made the challenge look easy as pie! She was smiling at the start of the challenge, and ended by sticking her tongue out with a goofy expression.

The original TikTok video that shows Underwood attempting the challenge had earned over 4.3 million views just three days after she posted it. People were stunned to see how well she did!

Underwood later shared the same video on Instagram. Her followers couldn’t believe how she was able to soar through so many tough moves so fast!

You can watch Underwood try the “Rock The Boat Challenge” in the video below. It’s impressive stuff!