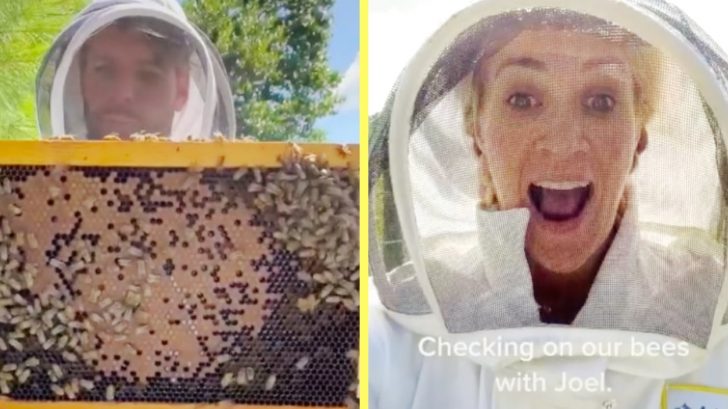 If you want to see what Carrie Underwood is up to at home, TikTok is where you need to go. The “Drinking Alone” singer is still fairly new to the video sharing platform, but she already has several popular videos up on her profile.

Carrie has used TikTok to share a workout, a recipe, a dance, and a few clips from her everyday life with her husband, Mike Fisher, and their two sons, Isaiah and Jacob.

In fact, Carrie’s first video on the platform was about a bird who snuck into their house. Underwood filmed Mike as he attempted to capture the bird so he could set it free.

The video was just posted in mid-May, and already has over five million views on TikTok alone.

This bird decided to quarantine with Carrie ?? | RP: Carrie Underwood

Birds aren’t the only creatures Carrie and Mike have been busy wrangling. They recently started beekeeping, and they’re learning how to properly care for the bees on their property.

Carrie used TikTok to document one of their visits to their hive. They were joined by their professional instructor, Joel, who has been teaching them all about the art of beekeeping.

Both Carrie and Mike were dressed in full-on beekeeping gear, and seemed to be enjoying themselves. “Mike thinks bee keeping is ‘Pretty Cool,'” Carrie wrote on the video’s caption.

We think it looks pretty cool! See some pictures from Carrie and Mike’s beekeeping adventures below.

Carrie and Mike recently opened up about their home and family life in a four-part miniseries, titled Mike and Carrie: God and Country. In the series, the couple shares stories about how their faith has impacted their relationship and lives.

Tune in below to watch the trailer for Mike and Carrie: God and Country. From being workout partners, to beekeepers, to parents, Carrie and Mike love walking through life together!