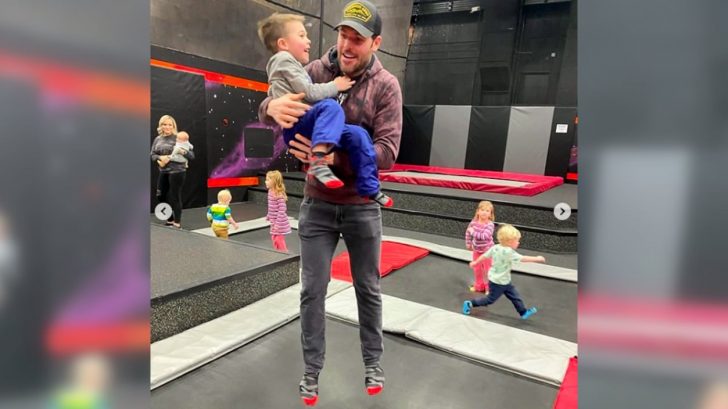 On February 27, Carrie Underwood and Mike Fisher‘s eldest son, Isaiah, turned five. Carrie acknowledged his birthday with a reflective post on social media, in which she questioned where the past five years had gone.

“It’s so bittersweet watching your children grow up,” Carrie wrote. “You want them to stay little and chubby and cuddly forever but it’s also so much fun seeing them turn into little people.”

Carrie also posted an old photo that shows her holding a newborn Isaiah in her arms.

He is five today. Where did these last five years go? It’s so bittersweet watching your children grow up. You want them to stay little and chubby and cuddly forever but it’s also so much fun seeing them turn into little people! Isaiah, you are funny and smart and such a caring little boy! You already have so much love for God and for all those around you. The day I became your mother was the day my life changed forever. You are five today but you will always be my baby boy…no matter how old you get. Thank you for being you. ❤️

Isaiah’s fifth birthday comes a month after his little brother, Jacob, turned one.

Carrie and Mike celebrated Jacob’s birthday by ordering a cake for him through Carrie’s good friend, Ivey Childers. She has designed all of Isaiah’s birthday cakes, so she had the honor of doing Jacob’s as well.

The cake Ivey made for Jacob’s first birthday was chocolate cake with green frosting on the outside. A tiny, blond-haired baby appeared on the top of the cake, surely made to resemble Jacob himself.

Based on the photos Carrie posted of Jacob smashing his cake, it must have tasted as good as it looked!

Happy birthday, Jacob! How are you already 1 year old? You are smiley, crazy, smart, soooo fast and into everything! And, apparently, you love cake! I can’t wait to see your personality continue to shine! I have a good feeling you’re going to keep us all on our toes for years to come! I thank God for you each and every day. You are truly our miracle baby!!! Mommy loves you! Swipe to see how cute the cake was before Jake got ahold of it! ?

So when Isaiah’s fifth birthday rolled around, it was a no-brainer to have Ivey make his birthday cake as well. Carrie and Mike celebrated his birthday with a weekend gathering at the trampoline park DEFY Nashville.

At the party, guests were able to admire the well-crafted Scooby Doo themed cake Isaiah had for his birthday. The bright-colored creation featured a nice-sized replica of the Mystery Machine with the number “5” printed on the side.

Carrie shared a slideshow containing several images of Isaiah’s cake from various angles. Also within the slideshow, she included an adorable picture of Mike and Isaiah playing together on the trampolines in the park.

Mike can be seen jumping on the trampoline while holding Isaiah in his arms. Both father and son were sporting huge smiles, making it clear they were having a blast together.

You can see the cute snapshot of Mike and Isaiah by flipping through Carrie’s slideshow below.

Just wanted to thank @iveycakestore and @defynashville for making Isaiah’s birthday celebration extra special! The cake was beyond amazing and all the kiddos left full and tired out! Tonight, when Isaiah was saying his prayers he thanked God for all of his friends and for the wonderful day he had…that made it all worth it! ? #NinjaTurtleParty with a #ScoobyDooCake #Hes5 #IveyCake #Yum

In the caption to her slideshow, Carrie said Isaiah went to bed that night and thanked God for the fun day he had.

“Tonight, when Isaiah was saying his prayers he thanked God for all of his friends and for the wonderful day he had…that made it all worth it!” she wrote.

We’re glad Isaiah had a wonderful birthday! It seems like it was only yesterday when we were going gaga over his baby photos in Carrie’s montage for her song “What I Never Knew I Always Wanted.” Reminisce with us by watching that video below.