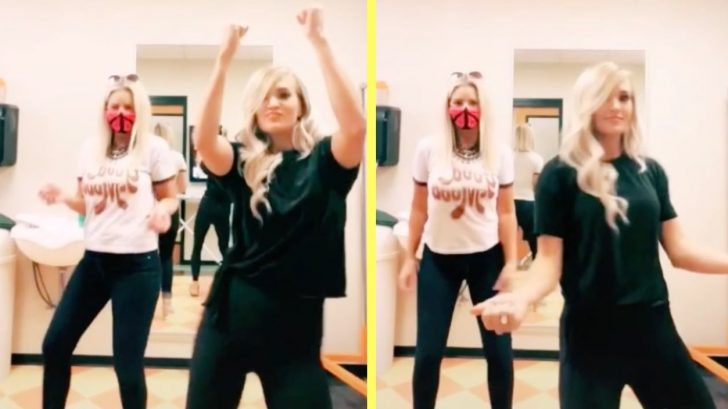 Carrie Underwood is proving she has what it takes to be a TikTok sensation, and she hasn’t even been on the platform for that long!

The “Drinking Alone” singer made her debut on the video-sharing service on May 20. She posted a series of clips that show her and her husband, Mike Fisher, rescuing a bird that got trapped inside their house.

“Desperate times call for desperate measures,” Mike said as he held up two large nets. After climbing up on a ladder, Mike successfully managed to capture the bird and set it free outside.

Since then, Carrie has shared a number of other successful videos, including a couple of clips that show her “ghost hunting” in her cabin. She also jumped in on one of TikTok’s biggest crazes that has dominated the platform for months…the “Savage” dance challenge.

Dance challenges are all over TikTok, but none is arguably more popular than the one choreographed to “Savage” by Megan Thee Stallion.

Carrie joined her hairstylist and makeup artist Melissa Schleicher to perform the dance, but she didn’t seem to be as familiar with the choreography as Carrie was.

Fans were impressed by Carrie’s smooth moves, even though she didn’t seem to have much faith in her dance skills herself. “We know we are not, in fact, savage,” Carrie wrote on top of the video of her dance.

But viewers seemed to think her dance was super “Savage,” because the video earned over two million views just two days after Carrie posted it!

MY QUEEN. OK BUT SHE CAN DANCE. AND LETS TALK ABOUT HER HAIR AND MAKEUP? SHES PERFECT • • • #carrieunderwood

Those who have been longtime fans of Carrie’s know this isn’t her first time showcasing her dance moves. She famously got her groove on in the music video for “The Fighter,” her 2017 collaboration with Keith Urban.

Relive Carrie’s dance from “The Fighter” by watching its official music video below. The video also features a professional dancer, so there is plenty of dancing for you to see in the clip!