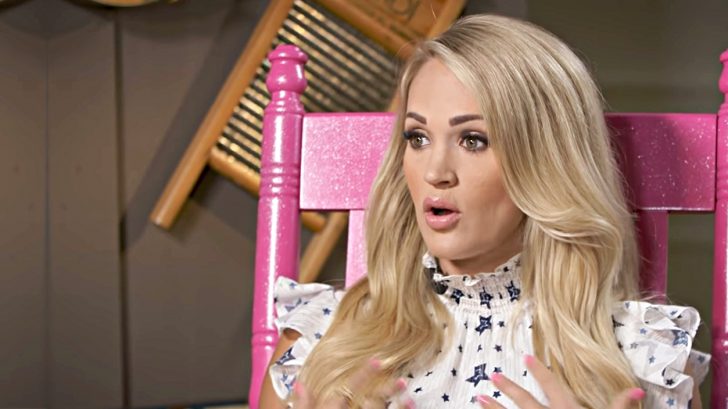 Ever since Carrie Underwood announced her pregnancy in August, her baby bump has been growing and growing. But there is one thing about being pregnant that just isn’t fair…

Carrie Underwood announced her and husband, Mike Fisher were expecting back in August. Set up with balloons that spelled out, “Baby,” Carrie sat on the couch and let fans everywhere know that there is another little one on the way.

On The Go Mommy-To-Be

While her belly keeps growing, Carrie has shown no signs of slowing down. She hosted the CMA Awards, received a star on the Hollywood Walk of Fame and is getting ready for her Cry Pretty 360 Tour.

What an amazing day! I am overwhelmed and overjoyed at the love I felt at my Hollywood #WalkOfFame Ceremony! Thank you @simoncowell and @bradpaisley for the kind words. It was an honor to have you there! Thanks to all the amazing fans that came out! This is a day I will never forget! ?: @cameronpremo

While her pregnancy has seemed to be going very smoothly there are some things you just can’t avoid when pregnant. Many women suffer from insomnia towards the end of their pregnancy and Carrie Underwood is no exception.

She posted to social media:

Please go bother someone else…like dads. Go bother dads. My husband sleeps so soundly and peacefully and I’ve been awake for 2 hours (so far). How is this fair? Imma lose my mind!”

Please go bother someone else…like dads. Go bother dads. My husband sleeps so soundly and peacefully and I’ve been awake for 2 hours (so far). How is this fair? Imma lose my mind! ????

While Mike might be soundly sleeping, Carrie has tried to find a few ways to cope with her insomnia. One of them is online shopping. It turns out, she even spent over $600 on makeup!

Worst part about insomnia = waking up this morning to see what I bought online while I was up. I just realized I spent over $600 on make up. ?‍♀️ #SeemedLikeAGoodIdeaAtTheTime #HelpMe #TakeAwayMyShoppingApps#ButThereWasASale

Carrie obviously loves her makeup which is why she even mentioned how mascara goes to waste when the waterworks come in her new song, “Cry Pretty.” You can check is out in the video below and let us know what you think in the comments.