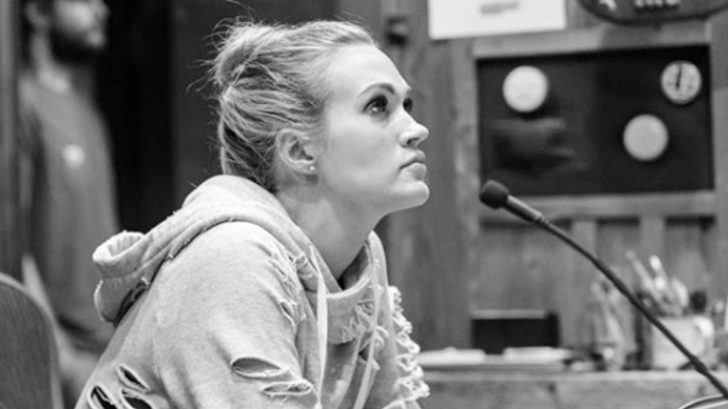 Eight years after winning the fourth season of American Idol, Carrie Underwood was not only one of the biggest stars in country music, but one of the biggest stars in the music industry as a whole. Because of this, it seemed to make perfect sense when she was cast to play Maria von Trapp in the 2013 live television production of The Sound of Music.

Julie Andrews, who played Maria in the famous 1965 film version of the musical, personally endorsed Underwood for the role. Andrews’ thoughts seemed to be right on the money, because Underwood was widely praised for her vocal performance in the production.

Since her star power was so strong at the time, Underwood helped draw in a number of viewers to the broadcast…18.62 million viewers to be exact. The production was a smash success, and brought NBC its highest Thursday night viewership numbers in over 11 years.

So when news broke that Zadan passed away unexpectedly on Monday (August 20) due to complications from a shoulder replacement surgery, the many people he worked with were brokenhearted. One person who took to social media to pay tribute to him was dancer, actress, and country singer Julianne Hough, who played Ariel Moore in the 2011 remake of Footloose.

“Craig, thank you for seeing me and believing in me as my first leading lady…It was one of the most special experiences of my life and I am eternally grateful,” Hough wrote.

Craig Zadan was a phenomenal producer, creator and friend. It is heartbreaking to hear that he has suddenly passed away from complications… My heart goes out to his family, his friends and all the people he has impacted through his belief and commitment to his craft. His passion and soul will be missed dearly. Craig, thank you for seeing me and believing in me as my first leading lady, Arielle in Footloose. It was one of the most special experiences of my life and I am eternally grateful. I’ll always have you in my heart..❤️

Underwood later took to social media to honor Zadan as well, writing about how “honored” she was to work with him on The Sound of Music Live! She described the type of person Zadan was, saying, “Craig was a visionary, a risk-taker, a lover of music, and just an all around nice guy.”

Such sad news. Craig was a visionary, a risk-taker, a lover of music and just an all around nice guy! I am honored to have worked with him. He will be greatly missed… https://t.co/QZO5xR5NU6

While Zadan may be gone, the contributions he made to film and musicals will never be forgotten. To honor him, watch Underwood perform bits of The Sound of Music Live! in the behind-the-scenes clip below.

Our prayers go out to all of Zadan’s family and friends during this sad time.