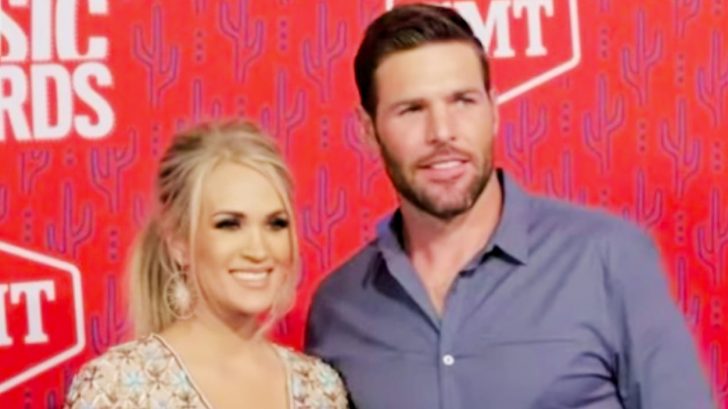 Before the ceremony started, Carrie already held the record for the most wins at the CMT Music Awards, with a total of 18. By the end of the night, she strengthened her chances of holding on to that record for a long time, because she walked away with two more trophies!

The legendary @trishayearwood presented QUEEN @carrieunderwood with Female Video of the Year for her inspirational video for “Love Wins” #CMTawards pic.twitter.com/ArIeDJD7Wg

Mike walked the red carpet with Carrie and proudly watched from the crowd as she accepted both of her awards. He also got the chance to witness her outstanding performance of “Southbound,” which took place on the steps of Nashville’s Parthenon.

The performance was a huge production…so huge that people were calling it the biggest performance in CMT Music Awards history.

Since that performance took place at the end of the night, Carrie didn’t have time to make it back to Bridgestone Arena to accept her trophy for Video of the Year. She was finally united with her trophy later in the night, and took to social media to share a photo and thank her fans.

Thank you so much, FANS and @cmt for these gorgeous #CMTAwards ! Thank you, @randeestnicholas for sharing your incredible creative vision and talents with me! #CryPretty And thanks @shanedrake for the crazy awesome energy you bring to video shoots! #LoveWins We had so much fun tonight! It all feels like a dream! ? #PartyAtTheParthenon

But before all of that, Carrie found some time to pose for a photo with Mike in the crowd. The two had already been photographed on the red carpet, but it’s become sort of a tradition for them to share a selfie from their awards show date nights.

It was actually Mike who posted the picture, which shows the two lovebirds snuggling up to each other with sweet smiles on their faces. Mike complimented his gorgeous wife in his caption, writing, “Date night at the cmt’s with this beauty!”

Date night at the cmt’s with this beauty!

These two looked great on the red carpet, but we love their more personal awards show photos like this one!

We’re sure Carrie and Mike’s smiles got even brighter after Carrie successfully pulled off her elaborate performance of “Southbound” at the CMT Music Awards. Go ahead and check it out in the video below.

Mike had to be beaming with pride as he watched Carrie perform!