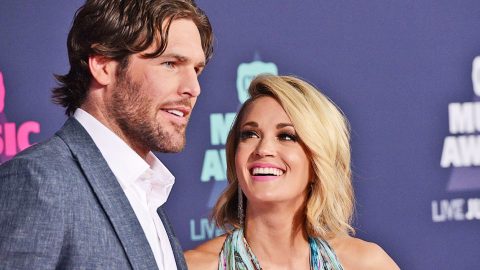 A lot of big events have occurred in Carrie Underwood and Mike Fisher‘s lives over the course of the past few months. The biggest event, of course, was the birth of their second child.

Jacob Bryan Fisher was born on January 21, joining his big brother Isaiah, who just turned four in February. Two days after Jacob’s birth, Carrie and Mike both took to social media to share photos of their new addition, and made it clear they were in absolute bliss.

“Our hearts are full, our eyes are tired and our lives are forever changed. Life is good…” Carrie wrote on her post.

Just days before baby Jacob came into the world, Carrie and Mike welcomed another new addition into their family. Only this new family member is of the four-legged variety.

Mike was the one to introduce the new addition…an adorable German Shepherd pup named Zero! The retired NHL star said that the puppy’s name was chosen by Isaiah.

“Isaiah affectionately named him Zero. I guess it fits because it’s the chance of surviving if you try to break into our home,” Mike joked.

Meet the newest member of our family! Isaiah affectionately named him Zero. I guess it fits because it’s the chance of surviving if you try to break into our home ? #GSD

Zero joins two other canine companions in the Fisher family…Carrie’s rescue dogs Penny and Ace. The two pups have been with Carrie for years, with Ace even appearing in the artwork for her 2007 album Carnival Ride.

The two pups also helped Carrie make a big announcement a few years back. The “Love Wins” singer dressed them up in “Big Brother” and “Big Sister” shirts to reveal that she was expecting Isaiah!

In honor of "Labor" Day…Ace & Penny would like to make an announcement. Their parents couldn't be happier! pic.twitter.com/bROrzuHJ4J

Meet The New Member Of The Family

So with two kids and three dogs, it seems like the Fisher family is pretty full! But Carrie and Mike decided there was room for one more, and introduced a new family member to the world on Tuesday (March 19).

This new family member is also a four-legged friend, though surprisingly isn’t a dog. It’s a horse!

In a post he made on Instagram, Mike explained that he has dreamed of owning a horse ever since he was a little kid. The smile on his face in the photo he shared proves how excited he is to finally see that dream come true!

The gorgeous black and white horse that can now call the Fisher farm home has the perfect name…Bojangles!

Ever since I was a kid I’ve always wanted horses. Today I got my first! Bojangles is finally home! He’ll have a dancing partner in a couple days

Mike teased the possibility that another horse may be joining Bojangles on the farm, writing, “He’ll have a dancing partner in a couple of days.”

That dancing partner made her grand arrival as promised, and her name is Annie! Mike shared a video of her running alongside his truck on his Instagram Story.

Carrie also took to social media to not only gush about Bojangles, but about Mike’s new cowboy persona. Now that he owns a horse, the Canadian-born Mike seems to be embracing his inner country boy…and has a cowboy hat to prove it!

“Every cowboy needs a horse…and a hat. I’m still working with him on the Southern accent,” Carrie teased. She shared two photos of Mike out on the farm with Bojangles, as well as one photo of just Mike while wearing his new hat.

We think the cowboy hat looks good on him, don’t y’all?

Every cowboy needs a horse…and a hat. I’m still working with him on the Southern accent. Meet Bojangles…newest addition to the Fisher family! ?

Doesn’t he sort of remind you of Garth Brooks a little bit in that last photo?

It turns out that Mike and Garth actually share a strong connection! A while back, Carrie caught Mike singing Garth’s hit song “The River” and filmed it. The video went viral, and Garth begged for Mike to come and sing it with him onstage.

While Mike still hasn’t joined Garth for an onstage duet, he did team up with him to perform a snippet of “The River” behind the scenes at one of his shows. Watch that video below.

With his singing, his new hat, and new horse, Mike really is turning into a full-on country boy!