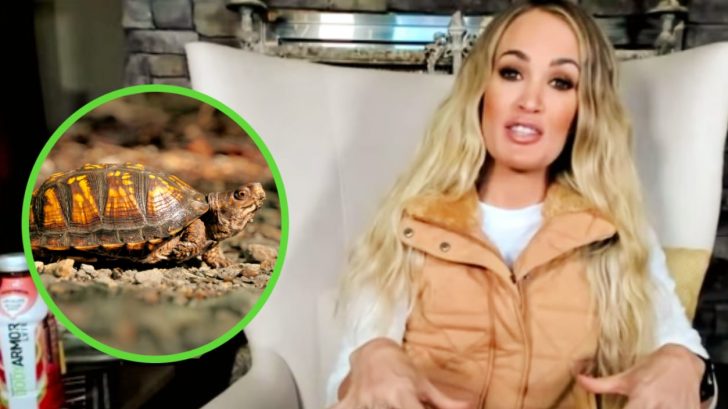 Carrie Underwood is a huge animal lover. She has been a vegetarian for years, and is always looking to take in new furry friends.

In addition to having three dogs (Ace, Penny, and Zero), Carrie and her family have horses, chickens, and cows. The cows are the newest members of the family, and were Christmas presents from Carrie’s husband, Mike Fisher.

But even though Carrie loves animals, there is one creature she’s admittedly a little scared of.

Carrie recently appeared as a guest on The Drew Barrymore Show, hosted by none other than actress Drew Barrymore. Drew has a segment of her show called “Drew or False,” in which she reads four statements about her celebrity guest. Three of the statements are lies, so it’s Drew’s mission to try and find the one true tidbit.

She guessed Carrie’s fact right away…which is that she’s scared of turtles!

Turtles seem like a pretty innocent animal to be afraid of, but once you hear Carrie’s explanation, it makes sense why she’s wary of them. She said, “I feel like out of all the animals on the planet, they’re the ones who have bit me the most.”

Carrie said as a child growing up in the country, turtles were some of the easiest animals to catch since they’re slow. Because she loves animals, young Carrie would often try to “pet them or hug them” and that didn’t always turn out well for her.

The turtles did not return Carrie’s affections, and would bite her instead. “I’ve been bitten by lots of turtles, it does not feel good,” she said.

Listen to Carrie talk more about her fear of turtles by watching her interview with Drew below. We completely understand why she’s hesitant around turtles after being bitten by them so many times!