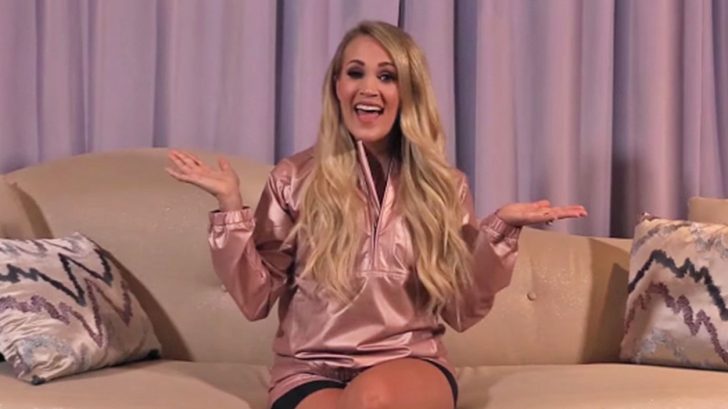 Just a five days after her tell-all interview with Redbook was published, where she said she and her husband may have missed their chance to have a large family, Carrie Underwood has some surprising news.

Already parents to three-year-old Isaiah, Underwood and her former NHL star husband Mike Fisher, are getting ready to expand their family a little sooner than we thought!

Underwood took to social media on Wednesday morning (Aug 8) to announce details about her upcoming Cry Pretty Tour 360, which will be similar to her last tour in that audience members will be sitting on all sides of the stage so she can be as close to them as possible.

“Ooh baby do we have a bundle of info to share with you!” she captioned her video message with her huge news.

Not only did she reveal that her tour will be starting in May 2019, and her album is dropping on September 14 this year, she answered one question she though fans might have.

“You might be wondering ‘Carrie, why is your tour starting in May?’” she said.

The camera panned out and revealed balloons behind her that spelled out “BABY”!

“Wellllll….YAY! Mike and Isaiah and I are absolutely over the moon and excited to be adding another little fish to our pond! This has just been a dream come true with the album and baby news and all that stuff,” she said excitedly.

Along with her album’s September release, the superstar country singer will co-host the CMA Awards for the 11th time with Brad Paisley, and then likely go on maternity leave until her tour kicks off on May 1!

#Repost @cma ・・・ @BradPaisley and @CarrieUnderwood return to host the #CMAawards for their 11th time on Wed, Nov. 14 on @ABCNetwork.

We aren’t sure when she is due, but we are so excited for this soon-to-be family of four! Watch her tour – and baby – announcement in the video below!