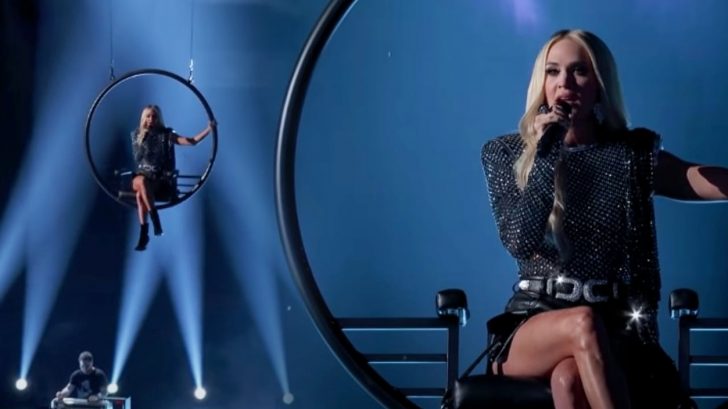 Carrie Underwood recently became one of Vegas’ main headliners after kicking off a residency at Resorts World Las Vegas in December 2021. Her residency continued into March of 2022 before taking a hiatus until 2023.

Underwood delivered an earlier March performance at a different Vegas venue…the Allegiant Stadium. The Stadium served as the home of the 2022 ACM Awards, which returned to the city on March 7 after being held in Nashville for two years.

Underwood was one of the 20+ artists included in the ACM Awards‘ lineup of performers. She was also nominated in multiple categories, including Entertainer of the Year.

For the first time ever, the ACM Awards were exclusively available to stream on Amazon Prime Video. They were not broadcast on regular TV. There were no commercial breaks, so viewers were able to watch their favorite artists sing in basically back-to-back performances.

When it came time for her performance, Underwood joined Jason Aldean to perform their #1 duet, “If I Didn’t Love You.” The song was named as the winner of the Single of the Year award earlier in the night!

Aldean and Underwood kept their duet a surprise until the day of the ceremony. The first fans heard about their plans was when Aldean was being interviewed on the red carpet!

Anyone who missed that interview was certainly surprised when Aldean started singing “If I Didn’t Love You” during the ACM Awards. He started off alone on the stage, so it made it seem as though Underwood would not be joining him.

But in another surprise, Underwood descended from the ceiling in a metal chair surrounded by a ring. What a way to make an entrance!

From there, Aldean and Underwood joined forces to deliver a show-stopping performance of “If I Didn’t Love You.” The two of them make a great team!

Jump below to watch the video of Underwood and Aldean’s performance at the 2022 ACM Awards. Talk about a standout moment!