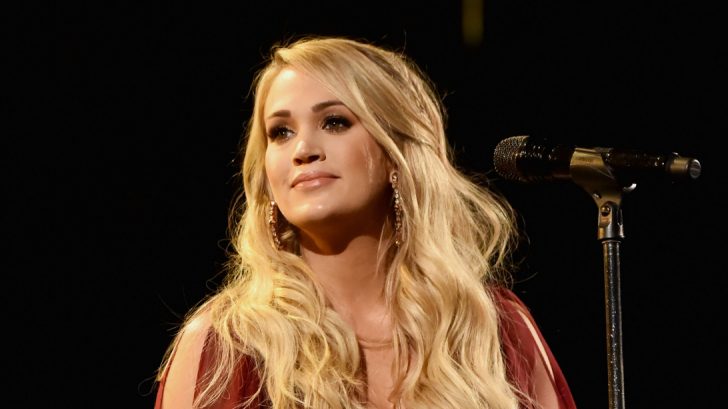 For the first time since announcing her pregnancy in 2018, Carrie Underwood walked the red carpet and did she ever shine! The “Something in the Water” singer was absolutely glowing as she showed off her growing baby bump in a form-fitting, black and gold gown on the carpet prior to October 2018’s American Music Awards.

Underwood wasn’t the only country artist in attendance, but she was the lone country performer. Throughout the evening, numerous artists representing various genres took to the stage, including Taylor Swift, Mariah Carey, Jennifer Lopez, and Gladys Knight. But, it was Carrie Underwood’s solemn performance of “Spinning Bottles,” the latest release – at the time – from her new album, that had the entire audience captivated.

Carrie, donning a stunning burgundy gown, stood in the center of a rotating stage surrounded by candles and an orchestra as she sang. The poignant lyrics along with Carrie’s flawless vocals resonated with the American Music Awards audience. Many of Carrie’s fans, new and old, reacted on social media and shared heartfelt posts about the song.

anyone who has had a family member or friend that’s struggled with addiction will melt for this song. spinning bottles by carrie underwood i cry every time ?

Finally got to see @carrieunderwood 's performance of #SpinningBottles. Simple, beautiful, heartfelt with mesmerizing vocals. Carrie you are in a class all your own. #AMAs

“Spinning Bottles” was written by Underwood along with David Garcia (“Meant to Be”) and Hillary Lindsey (“Jesus, Take the Wheel,” “Girl Crush”) and appears on her latest studio album Cry Pretty. During a pre-show interview Tuesday evening, Underwood shared that the substance abuse-inspired song was an emotional and personal one to write.

“I feel like when we wrote this song ‘Spinning Bottles’ we kind of each had people in our heads go through this,” she said. “It’s hard to write, it’s hard to get it out, it’s hard to say it’s gonna go on the album … It’s difficult to sing it to the world, but it’s life; that’s a part of life. It’s hard to just put yourself out there like that.”

Not only did Carrie Underwood deliver one of the most talked about performances of the night, but she also took home the trophy for Best Country Female Artist for the sixth time. Following her eventful night, Underwood posted a touching note to fans thanking them for their support.

Such a wonderful night! I am honored and humbled by the love I received from you all tonight. I made absolutely no sense in my speech and didn’t say half of what I should’ve, but I want you all to know that your support means everything to me! Also, I am beyond honored to be in the company of such talented ladies like @marenmorris and @kelseaballerini to represent the women of Country Music tonight. That said, I’m off to peel this dress off and cuddle up to my little man! I shall go to bed with a full and happy heart! ❤️?❤️?❤️ And, of course, thank you #AMAs for having me and for letting the fans call the shots!