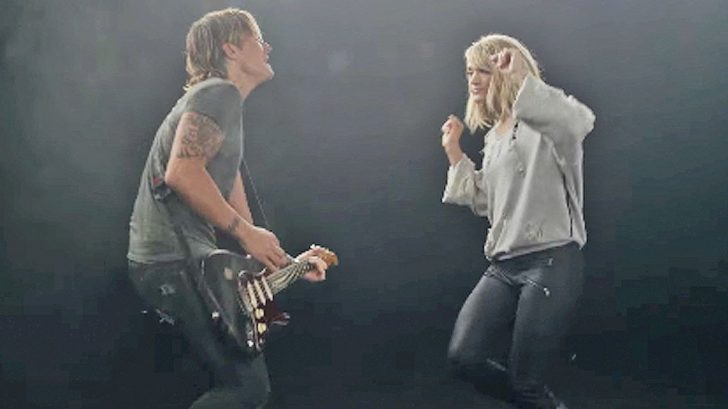 In February 2016, Keith Urban took to social media with Carrie Underwood to announce that they officially released their duet “The Fighter” as a single.

One of the best pictures from last night. Carrie Underwood and Keith Urban performing at the Grammys.

“Here we are from the set, it looks a bit like a boxing ring, although Carrie and I get along pretty well,” he said in the video.

Seeing as the title of the song is “The Fighter,” it makes a lot of sense that the video is set in a boxing ring type of setting.

Keith and Carrie Underwood have an announcement for you…

The video goes back and forth between footage of Urban and Underwood performing the call-and-answer-styled song together in the boxing ring filled with lights and a blonde, beanie-clad woman dancing in the street.

She’s not the only person dancing in this video, though! Miss Underwood, who dons a super cute torn sweater, shows off some of her spontaneous dance skills, making us green with envy that she is dancing alongside the hunky Keith Urban!

Urban included “The Fighter” on his GRAMMY-nominated country album Ripcord. Upon the album’s release in May 2016, “The Fighter” sold 25,000 copies and debuted at No. 25 on Billboard‘s Hot Country Songs chart, jumping to No. 11 the next week. It’s amazing for a song to have this kind of success without being released as a single, which they finally did on February 6, 2017.

Keith has a surprise for y'all this Sunday in honor of the #GRAMMYs! Stay tuned. #TheFighter

While being interviewed by Ryan Seacrest on the red carpet at the Grammys, Underwood described their duet as “a dance-y type song” and a song the will “get stuck in your head in a good way.”

Urban was inspired to write the call-and-response styled song with songwriter and producer Busbee when he was “thinking about how long it’d been since I heard a song with a guy and girl actually speaking back and forth to each other,” according to The Boot.

He added, “It’s a song about helping to heal and protect someone you love. It’s a song about reassurance that you’ll always be there to take the blows the world can throw. Carrie and I had sung together before, and I thought our voices blended really well — so she was unquestionably the right choice. It was such a relief that she wanted to do it.”

Their voices sound incredible together and we can’t imagine any other duo being able to pull this song off.

Also, who knew Carrie Underwood had moves like this?! We sure didn’t, but we do know that we absolutely loved seeing this side of her!

Watch their music video for “The Fighter” below.