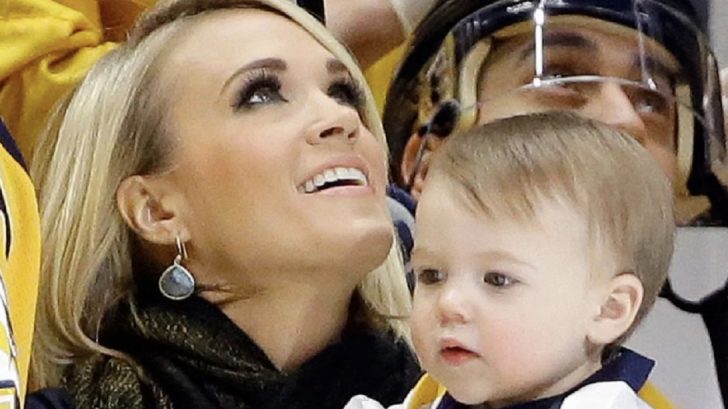 In a new Instagram post made on Saturday (October 20), the 35-year old shared a selfie taken on the soccer field during one of her son’s games. The caption read, “Officially a soccer mom this morning! It’s chilly out but I’m staying warm rocking some [Calia by Carrie].”

From the sound of it, 3 1/2 year old Isaiah has inherited his dad’s athleticism. “The kids played a good game! Isaiah scored two goals for his team…and one for the other team. Hey, a goal’s a goal!,” Carrie wrote.

Officially a soccer mom this morning! It’s chilly out but I’m staying warm rocking some @caliabycarrie …the kids played a good game! Isaiah scored two goals for his team…and one for the other team ?‍♀️. Hey, a goal’s a goal! ⚽️

Underwood is in full-time mommy mode as she takes some time off the road to prepare for the birth of her second child with her husband of eight years, Mike Fisher. But, the Fisher crew will be back on the road in May, after the birth of the new baby, for Carrie’s Cry Pretty Tour. Even on tour, Carrie takes her parenting seriously and doesn’t take advantage of the help that’s available.

“Nobody ever got up with my kid in the middle of the night. That was me, and I’m proud of that,” she states of touring with Isaiah when he was an infant. “I was tired and it was hard, and it’s going to be really hard again. But, that’s just what moms do. You figure out how to juggle.”

The news of Carrie’s pregnancy came after a year full of trials for the singer and her husband. In 2017, she suffered multiple miscarriages, a heartbreak that she detailed in an interview with CBS News.

The American Idol champ admits that she was afraid to get angry because of how blessed she had been.

“My son, Isaiah, is the sweetest thing. And he’s the best thing in the world. And I’m like, ‘If we can never have any other kids, that’s okay, because he’s amazing.’ And I have this amazing life. Like, really, what can I complain about? I can’t. I have an incredible husband, incredible friends, an incredible job, an incredible kid. Can I be mad? No,” Carrie shared.

In the midst of her miscarriage heartbreak, Carrie fell outside of her home and suffered horrific facial injuries that left her with a broken wrist and more than 40 stitches in her face. She stayed in hiding for several months while she healed, but during that time was working on her latest album, Cry Pretty, which was inspired by the heartache of the previous year.

Now Carrie Underwood is on the other side of what an interviewer called her “year of despair.” She is looking forward to a new baby, a new tour, and many years of being a proud soccer mom. We agree that she has been blessed.