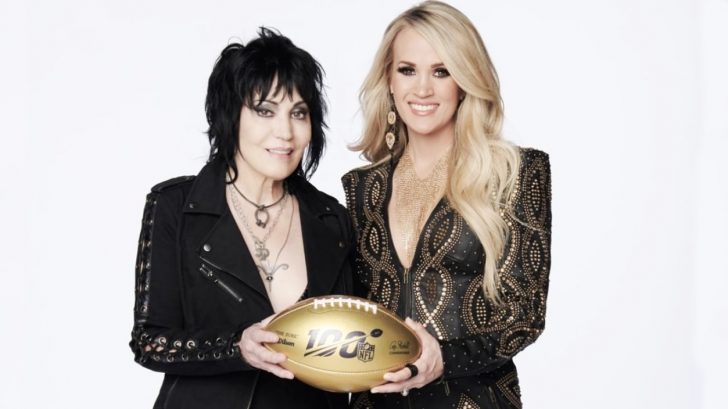 For the seventh year, Carrie Underwood will be singing the opening theme song for NBC’s Sunday Night Football.

The “Southbound” singer continued on the tradition of singing “Waiting All Day For Sunday Night,” which is a reworking of the Joan Jett song “I Hate Myself For Loving You.” After a few years of performing the Sunday Night staple, the song changed to “Oh, Sunday Night,” a song inspired by Underwood’s duet with Miranda Lambert, “Somethin’ Bad.”

Despite the rave reviews on the new opening, NBC has revealed that they are once again changing the opening song. This year’s change is due to it being the 100th anniversary of the NFL.

And for the centennial celebration every Sunday night, Underwood will be joined by a legendary singer – Joan Jett!

NBC celebrated the change with an announcement on social media.

The photo of the two singers holding a gold football was accompanied by the caption, “Hey Jack, it’s a fact, THE SONG’S BACK IN TOWN. Carrie Underwood and Joan Jett are bringing ‘Waiting All Day’ back to SNF this season!”

Hey Jack, it's a fact, THE SONG'S BACK IN TOWN. @carrieunderwood and @joanjett are bringing 'Waiting All Day' back to SNF this season! ?

NBC Sports shared a behind-the-scenes look at the filming of the Sunday Night opening.

Along with the behind the scenes video, Underwood just posted a preview of the new song on her Instagram on Monday (August 26), telling everyone to tune in on September 8 to see the full video.