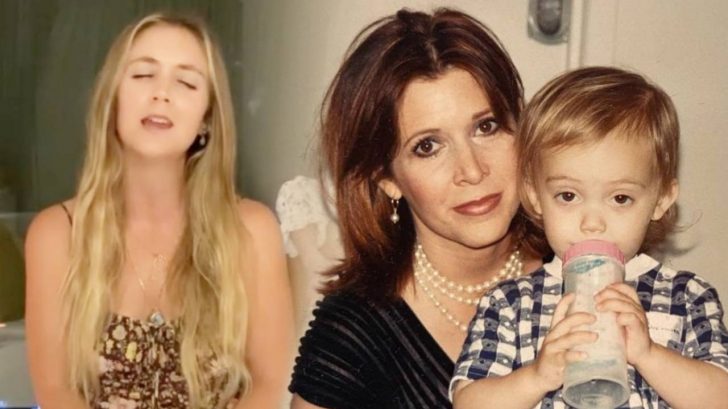 On December 27, 2016, the world was saddened when news broke that Carrie Fisher had passed away after having a medical emergency on a plane several days earlier. One day later, Fisher’s mom, the legendary Debbie Reynolds suffered a stroke while at her son’s house planning her daughter’s funeral. She told him, “I want to be with Carrie,” and then passed away.

Fisher’s only child, actress Billie Lourd, confirmed her mother’s passing but didn’t post on social media until after the new year.

“Receiving all of your prayers and kind words over the past week has given me strength during a time I thought strength could not exist,” she wrote. “There are no words to express how much I will miss my Abadaba and my one and only Momby. Your love and support means the world to me.”

Throughout the last five years, Billie has paid tribute to her mom and grandmother on many different occasions.

Like both her mom and grandma, Billie Lourd has an incredible singing voice and sometimes performs covers she posts on her Instagram page. For what would have been her mom’s 63rd birthday, Billie sang Tom Petty’s song “American Girl,” one of Fisher’s favorite songs. She explained that on big milestones, she likes to celebrate her mom with things she loved, like music.

So, on the fifth anniversary of her mom’s death, Billie once again turned to music to help her through the day and honor her mother at the same time. This time, the song came to her in a sense. She was listening to music and “Landslide” by Fleetwood Mac came on.

“I’m working away from home right now and one night when I was having a particularly grief-y moment this song came on and the lyrics spoke (well actually sang) to me more than they ever had before,” she wrote.

Billie was talking about the lyrics, “Well I’ve been afraid of changing cause I built my life around you. But time makes you bolder.”

The actress continued, “I didn’t know who to be or what to do after my mom died. I was afraid of changing because I had built my life around her. Then she was gone. And I had to rebuild my life without her. And it wasn’t (and still isn’t) easy. But time has made me bolder. I never stop missing her but I have gotten stronger with each passing year. And if you’re going through something similar time will make you bolder too.”

Billie is currently in Australia filming the upcoming Julia Roberts and George Clooney-led film Ticket To Paradise and Kaitlyn Dever, one of her very good friends is also in the cast. The two previously worked on Booksmart together. Kaitlyn and her sister Mady helped Billie honor her mother with a cover of “Landslide.”

Kaitlyn played the guitar intro and Billie sang the song and sounded eerily similar to the gravelly singing voice of her mom. Kaitlyn and Mady came in on the chorus with chill-inducing harmonies. When the time came for the lyrics, “Well I’ve been afraid of changing cause I built my life around you. But time makes you bolder,” tears welled up in our eyes.

Make sure to press play on the powerful performance below.