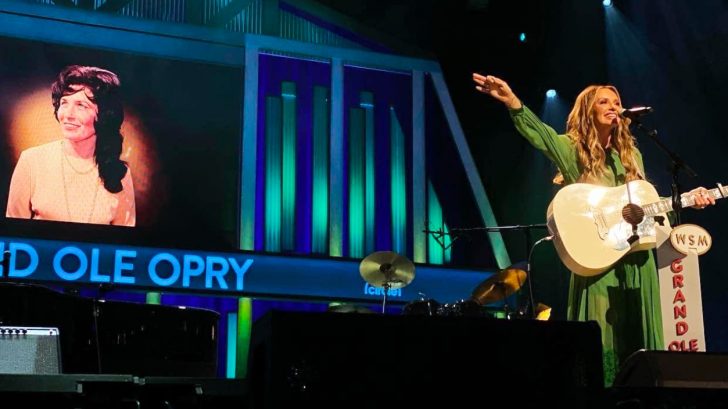 Like the rest of the world, Carly Pearce was heartbroken when she found out country music legend Loretta Lynn had passed away the morning of Tuesday, October 4th.

Taking to social media, Pearce wrote, “She showed us all how to unapologetically tell the truth. One of the greatest there ever will be. I’ll be singing “Dear Miss Loretta” with a little extra love tonight at the @opry Now she really is a Honky Tonk Angel.”

She showed us all how to unapologetically tell the truth. One of the greatest there ever will be. I’ll be singing “Dear Miss Loretta” with a little extra love tonight at the @opry ♥️ Now she really is a Honky Tonk Angel ? #RIP pic.twitter.com/fiUNnTrlvZ

Pearce was already scheduled to perform at the Grand Ole Opry the night of Tuesday, October 4th.

Opry star @carlypearce steps back into the circle on Tuesday, October 4th as we kick off our Opry at 97 celebrations!

Like she said in her tweet, Pearce did, in fact, perform her song “Dear Miss Loretta,” which she wrote about the country legend. She included it on her 2021 album 29: Written In Stone, and the track featured Patty Loveless, who happens to be Lynn’s cousin.

As Pearce introduced “Dear Miss Loretta” to the Opry audience, Pearce said, “We absolutely lost one of the greatest that there ever was and will be and as I stand here tonight I feel overwhelmed with just the legacy and the beauty that she is and she was. And she heard me, which is quite crazy to me. I played this song on the Opry stage I debuted it, just like I’m going to do it tonight. Loretta happened to be watching the live stream of the Grand Ole Opry and heard me sing this song and I’ve never played this for anybody publicly, but I felt like tonight standing on the Opry stage and in the circle that the honky-tonk angel, which she is now officially a honky-tonk angel, that maybe she wants me to do this. So, this is a message that I got from Loretta Lynn last year.”

Pearce held her phone up to the microphone so every one could hear the audio message Loretta sent her.

“Hi Carly, this is Loretta honey, I’m laying here in bed just taking it easy and I’m fixing to get up to wash my face and maybe comb my hair. I don’t know, I ain’t got no place to go, have I? Anyway I love your song, thank you, sweetheart. I love you, honey. Hey, come and see me sometime!”

Pearce said she “listened to the message a lot today” before diving into the song that was inspired by her.

In the song, she sings, “I ain’t a coal miner’s daughter/ But my grandmother was/ Must be whiskey in the water/ Must be bourbon in the blood/ I’m a long way from Kentucky/ But the hurtin’s the same/ Now I know why you sang that way.”

Watch her full performance below.