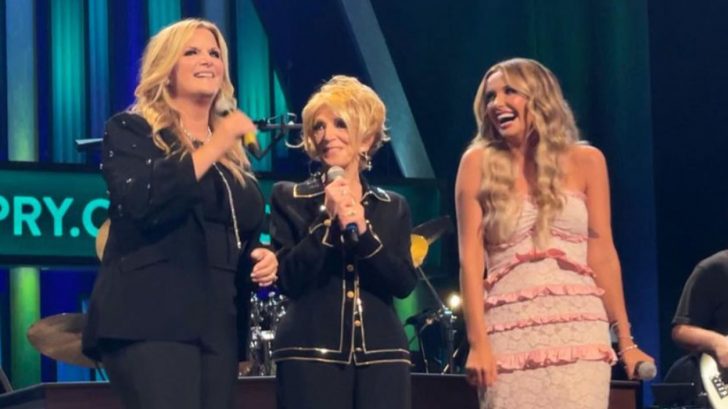 Carly Pearce is now officially a member of the Grand Ole Opry! The momentous occasion happened on Tuesday, August 3, 2021.

Trisha Yearwood presented Pearce with the coveted statue – a miniature version of the iconic Opry mic stand which signifies her membership. Yearwood’s husband, Garth Brooks watched from side stage.

Pearce went on to open her set with her career-defining hit, “I Hope You’re Happy Now,” before calling Trisha Yearwood on stage for an impressive duet version of Yearwood’s Oscar-nominated “How Do I Live.”

“Last night was the greatest moment of my life. Thank you for welcoming me into the family @opry & thank you @trishayearwood for the beautiful induction.”

Pearce was invited to become a member of the Grand Ole Opry in late June. She received her invitation to join by none other than Dolly Parton with the invite on June 17, 2021

To wrap the night up, both Pearce and Yearwood were joined by Jeannie Seely and the three of them performed a cover of the Kitty Wells classic, “Making Believe.”

Watch their performance in the video below.