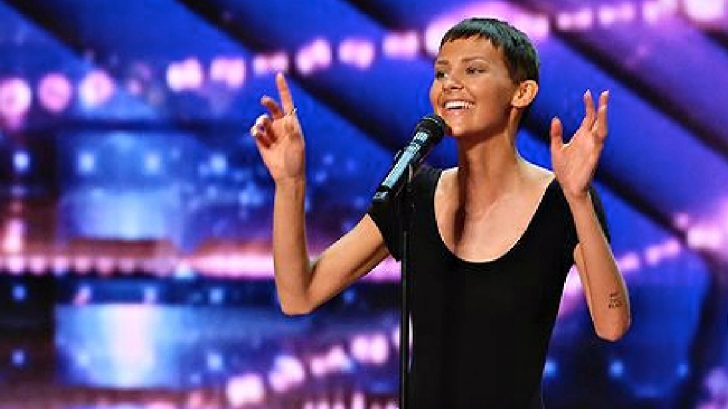 Break out the Kleenex. America’s Got Talent delivered one of the most emotional moments in the show’s history Tuesday night when a singer named Jane Marczewski, who goes by the stage name Nightbirde, nearly brought Simon Cowell to tears with her story.

Nightbirde, a 30-year-old from Ohio, is currently battling cancer, but hasn’t let it stop her from pursuing her dreams.

“Last time I checked, I had some cancer in my lungs, my spine and my liver,” she told the judges prior to her performance. “It’s important that everyone knows I’m so much more than the bad things that happened to me.”

The singer went on to sing her original song titled “It’s Okay,” a song that tells the story of her battle with cancer. The judges sat stunned and fighting back tears as she sang the heartfelt lyrics. As soon as she finished singing, the crowd was on its feet giving her a standing ovation.

Judge Howie Mandell called Marczewski’s performance the “most authentic thing I’ve heard this season.” The other judges agreed and called the song “powerful” and “heartfelt.”

“Your voice is stunning. Absolutely stunning,” Simon Cowell told the singer. “There was something about that song…the way you casually told us what you’re going through.” Cowell took a moment to compose himself, giving Jane a chance to say, “You can’t wait until it’s not hard anymore before you decide to be happy.”

The comment had Cowell fighting emotion, his voice cracking before he stopped to take a drink. “There have been some great singers this year. And, I’m not going to give you a yes,” Cowell said just before he pushed the Golden Buzzer and sent Marczewski straight through to the live competition rounds. As confetti showered the stage, Cowell joined the singer on stage and the two shared a hug.

Marczewski told cameras backstage that she only has a 2% chance of survival, but that it wasn’t 0%.

“2% is something and I wish people knew how amazing it is,” the singer shared.

Watch Jane Marczewski’s emotional America’s Got Talent audition in the video below.