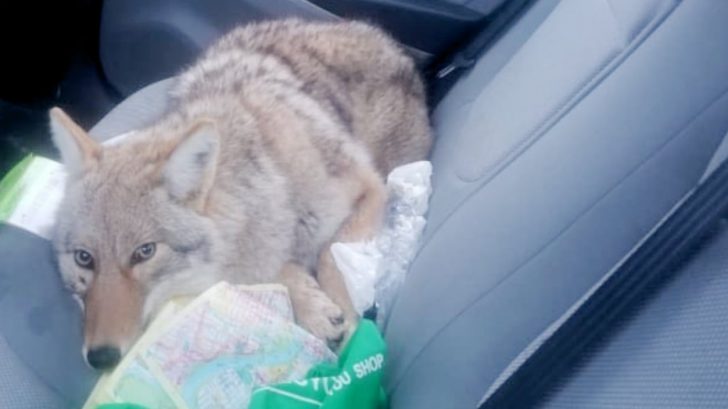 Canadian Eli Boroditsky was driving to work the night shift at his job at the Bothwell Cheese factory in late 2019 when he struck an animal running across the road. At first glance, Boroditsky believed the animal was a dog, and stopped his car to save it.

The animal had been thrown into the ditch after being hit, so Boroditsky grabbed a flashlight and went searching for it. Once he found it, he picked up the injured creature and set it on the floor of his SUV.

Boroditsky then continued on his way to work, fully believing he had an injured dog in his car. “I thought it was a German shepherd or a husky,” Boroditsky told CBC.

But when Boroditsky arrived at work, one of his co-workers dropped a bombshell on him. The co-worker informed Boroditsky that the injured animal in his car wasn’t a dog at all, but rather, a coyote.

Eli Boroditsky was driving to his night shift last week on a narrow rural road in Manitoba, Canada, when his car hit what he thought was a dog streaking across the dark road.​ https://t.co/8Qu584PQM5

Boroditsky was shocked to hear this, especially since the animal seemed so calm. “It is amazing how docile it was. I was petting it,” he said.

It is easy to understand why Boroditsky misidentified the coyote, since it weighed only 30lbs and was seemingly tame.

Boroditsky immediately started researching where he could take the coyote. But since it was late in the evening, he was told he’d have to wait until morning for animal management to come and take the animal.

So Boroditsky went to work, and kept the coyote safe in his car during the shift.

In the morning, a conservation officer came to the cheese factory and picked up the coyote. She was taken to the Wildlife Haven Rehabilitation Centre to recover.

Zoé Nakata, the executive director of the centre, spoke to CNN about the coyote’s condition, saying she was “getting stronger by the day.” At the time, Nakata estimated the coyote would be ready to be released within a few weeks.

When Eli Boroditsky left for his night shift, he did not anticipate an 11-hour rescue of a wild coyote pic.twitter.com/AHt7rJHMna