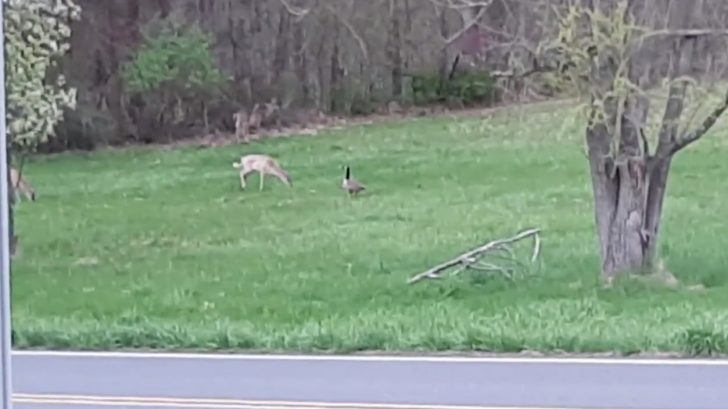 A resident of York County, Pennsylvania recently captured some remarkable footage of a Canadian goose chasing off a couple of deer in the backyard.

The footage appeared to be taken from within someone’s home looking through a window, at a grassy field on the other side of the street. The video starts off with a deer standing a few feet away from the Canadian goose.

It begins to charge at the deer and bite it on the nose but the deer was quick to react and quickly dashed out of the way and took off running a few feet and stopped. The goose rose its head high to watch the deer that, at this point, was grazing.

A little bit later, another deer comes out of the woods to graze and makes the same mistake of getting a little too close. The goose then chases him off a few feet as well. That wasn’t the end of it though, the first deer comes back for some more and gets chased off for a second time.

“Eventually, a compromise was reached; the goose went wherever it wanted, and the deer kept their distance,” ABC27 reported.

Watch Video Of Canadian Goose Vs Two Deer Below