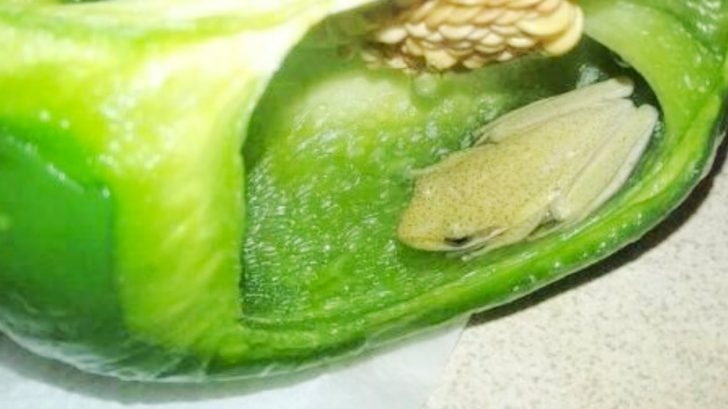 Whenever you buy produce at the grocery store, you always check it for something, be it firmness, ripeness, or color. You also look for bruises on fruit, and give any apples a once-over to make sure you don’t spot any wormholes.

But we bet you’ve never thought to check your produce for live frogs! Though you wouldn’t think that would be a concern, one Canadian couple discovered it can be.

Nicole Gagnon and Gérald Blackburn went to their local grocery store in Saguenay, Quebec and purchased a green bell pepper. Maybe they intended to make fajitas, a big salad, or a veggie omelette. Whatever their meal plans were, they got a little something extra when they cut into the pepper and discovered a green frog inside.

To make matters all the more mind-boggling, the frog was alive and well. His presence definitely confused Gagnon and Blackburn, who had no idea how he managed to climb inside the pepper without creating any obvious point of entry.

“How the frog ended up in the pepper, I have no idea,” Gagnon told CBC.

Gagnon and Blackburn reported their discovery to their grocery store and Quebec’s Ministry of Agriculture, Fisheries and Food, or MAPAQ. CBC reports they took the frog out of the pepper and placed it in a small container to hand over to MAPAQ, along with the green pepper.

The couple did not eat any part of the pepper before discovering the frog, so they did not fall ill, though there’s no telling if they would have.

MAPAQ will try to figure out where the frog and the pepper originated from. Each year, MAPAQ reports 20 similar cases of animals being found in food products. Normally, those animals are insects and spiders, not live frogs.

Since the pepper was an imported product, the case will also be examined by the Canadian Food Inspection Agency.

What a wild story! We bet you’ll now think twice before purchasing a pepper from the grocery store…and maybe before you buy your lettuce and greens as well.

In the summer of 2019, a family in Wisconsin found a live frog inside a container of salad greens. You can learn more about that discovery by tuning in to the news report below.

Even though the idea of finding a live frog in your food may seem freaky, you can feel rest assured knowing it is a rare occurrence. It certainly doesn’t happen every day!