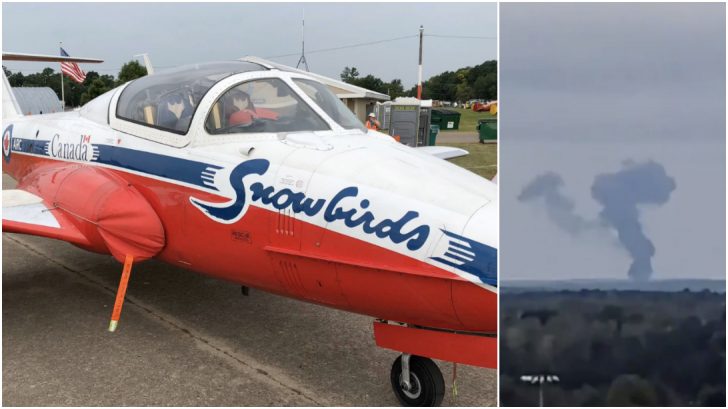 A Canadian Snowbird plane crashed prior to the Atlanta Air Show that was taking place Sunday (October 13) at Tara Field near Atlanta Motor Speedway. The pilot safely ejected from the CT-144 aircraft before it crashed into a nearby field.

The Atlanta Air Show sent out a statement recapping the incident:

“Snowbird 5 Captain Kevin Domon-Grenier. was forced to eject from his aircraft shortly before our performance in Atlanta this afternoon. Domon-Grenier made it safely to the ground and is okay. The aircraft fell in an unpopulated area and no one was injured. It is too early to speculate on the cause of the incident. We are thankful Kevin and the public are unhurt. “

The remainder of the air show was canceled following the crash.

A bystander captured footage of the aftermath of the crash. A video posted to Twitter shows a large pillar of smoke in the distance as other planes can be seen flying overhead.

The Snowbirds, known as the 431 Air Demonstration Squadron, are a military aerobatics team of the Royal Canadian Air Force. Serving as ambassadors of the CAF, the Snowbirds “demonstrate the high level of skill, professionalism, teamwork, discipline and dedication inherent in the men and women of the CAF and they inspire the pursuit of excellence wherever they go in North America,” according to their website.

Captain Domon-Grenier has been with the Snowbirds since 2017 and has more than 1600 hours of military flying experience.