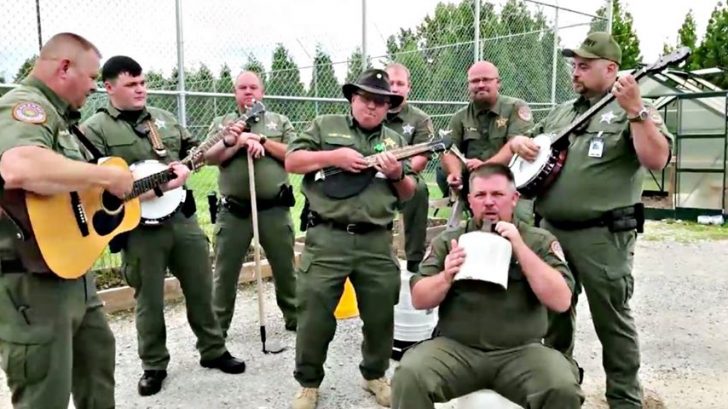 The chief purveyor of peace from this small Tennessee community flipped through some songs looking for something “easy and fun for him and his group to play.” That’s when “Dooley” from the beloved Andy Griffith Show came to mind.

Shrum pulled some of his officers together and the rest…well, you’ll see the results in the video below.

While many of the officers were able to scrounge up instruments, the group still was in need of a mandolin. So, the officers turned to their captive audience, literally. According to WDEF News, the mandolin you’ll see in their video was made by an inmate the morning of the performance.

How’s that for group participation?

Known as The Darlings on the Andy Griffith Show, the good-natured but troublemaking Appalachian clan only came into Mayberry when they needed Andy to solve a problem. Each visit was accompanied by a song. During two scenes of the show’s run, the song was “Dooley,” which was first played on the show in 1963 and told the story of a man the real-life Darlings (The Dillards) knew when they were growing up in the Missouri Ozarks. He made moonshine!

If you’re wondering why moonshine whiskey is called “moonshine,” it’s because you had to make it at night so you wouldn’t get arrested!

Posted by Moonshine: A Global History on Friday, September 29, 2017

Sherriff Shrum said, “the song choice was all about the community.” He added his inspiration was Bluegrass Underground that recently moved to Grundy County. Also, he indicated there’s a hidden tribute to a longtime deputy in this video.

Watch Sheriff Shrum and the Grundy County officers crush the lip sync battle in their video!

You can also check out the original from the Andy Griffith Show below.