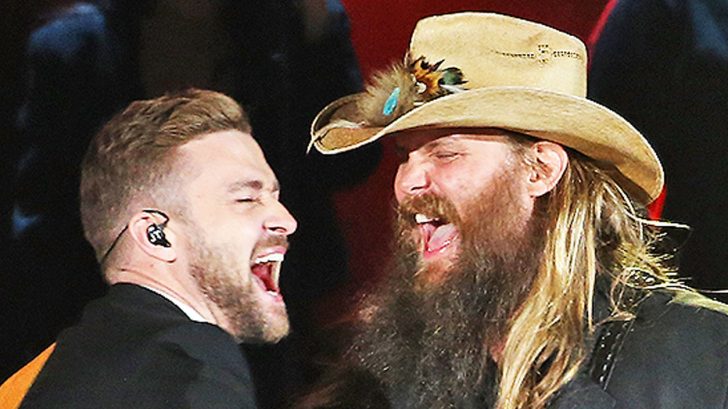 The 2015 CMA Awards changed everything. Chris Stapleton, who was a seemingly unknown artist to mainstream country music fans, swept just about every award he was nominated for and  catapulted him to super stardom. He performed an epic duet with Justin Timberlake, singing Timberlake’s “Drink You Away” and a soulful rendition of the George Jones song “Tennessee Whiskey.”

Since that CMA Awards performance, fans of both artists have been begging for more collaborations – and they listened. They reunited during Timberlake’s headlining set at the Pilgrimage Music & Cultural Festival in Franklin, Tennessee in September 2017.

Timberlake invited Stapleton and his wife Morgane on stage for an encore of their historic CMA Awards performance of “Tennessee Whiskey,” as well as two more of Stapleton’s songs. This apparently wasn’t enough for fans, who continued to beg for another collaboration!

Well, ask and you shall receive! In January 2018, Timberlake revealed he would be dropping his first album in four years and confirmed Stapleton would be a guest vocalist on one track. Called “Say Something,” the song debuted towards the end of January and the music video, at press time, has over 62.8 million views.

Timberlake and Stapleton performed the song live for the first time on The Tonight Show Starring Jimmy Fallon immediately following the Super Bowl, where the “Can’t Stop The Feeling” singer served as the halftime performer.

Now, the duo is teasing their upcoming performance at the 2018 Brit Awards, which will be held on Feb. 21 at the O2 Arena in London, England. This will mark the first time they will perform at an awards show together since their epic 2015 CMA Awards collaboration.

In a Tuesday night (Feb. 20) Instagram post, both singers shared the same photo of the two of them standing on the O2 Arena stage during rehearsal. Because it’s clearly not possible to tell them apart, Timberlake captioned his, “I’m the one in the beanie,” and Stapleton wrote, “I’m the one in the cowboy hat,” on his.

#britawards tomorrow night… I’m the one in the beanie.

We’re not sure about you, but we can’t wait to see these guys perform “Say Something” live at the Brit Awards! Until then, re-live their historic CMA Awards performance below.