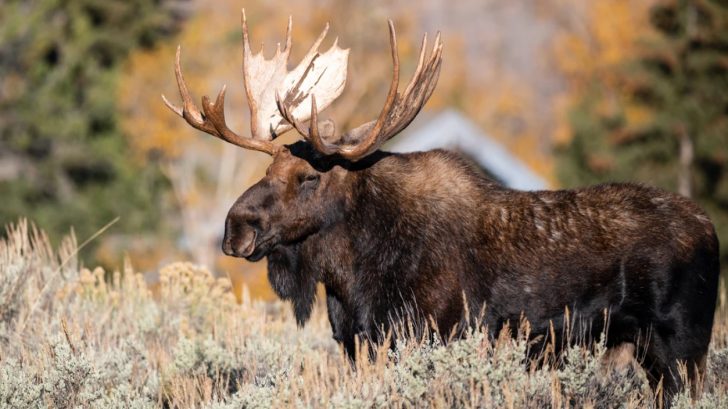 A man camping in Idaho reportedly shot and killed a moose after it destroyed his campsite and tried to charge and trample him and his dog.

The Idaho Department of Fish and Game said that the incident happened at a Harrison Lake backcountry campsite just north of Sandpoint, Idaho. The camper said he tried to hide behind a tree but the moose came after him anyway.

“It’s unclear whether the dog was leashed or not but it was in the man’s camp,” Kara Campbell, an IDFG spokeswoman told Spokesman. “A .45 caliber handgun was used.”

In self-defense, he pulled the trigger to prevent being trampled after being charged at by the moose. Wildlife officers found the deceased moose and closed down Harrison Lake trailhead for a week so that bears and other animals can feed on it without being in conflict with other hikers.

Ben Read, who hikes there 15 to 30 times a year, says that he has seen the moose in the area regularly the past five years, but never has he seen it be aggressive towards humans.

“I can’t say there’s never been an issue, because I know people generally run into him around the camp and obviously the two don’t mix,” Ben said. “However, I’ve never heard of a charging/trampling issue that someone was never able to avoid or get away from (not to mention probably half of the hikers up there these days carry firearms).”

IDFG spokeswoman Kara Campbell says campers should educate themselves on hiking and camping in the wilderness before visiting. She also recommends that everyone bring bear spray and know how to use it, and not just for the bears, but for other large animals like moose.

Moose can be very dangerous and the best thing to do is put a large object between you and the moose, like a car or tree. Below is an example of this. It is footage captured from a man’s home security camera showing the time he got to safety from a massive male moose by hiding inside his tool shed.