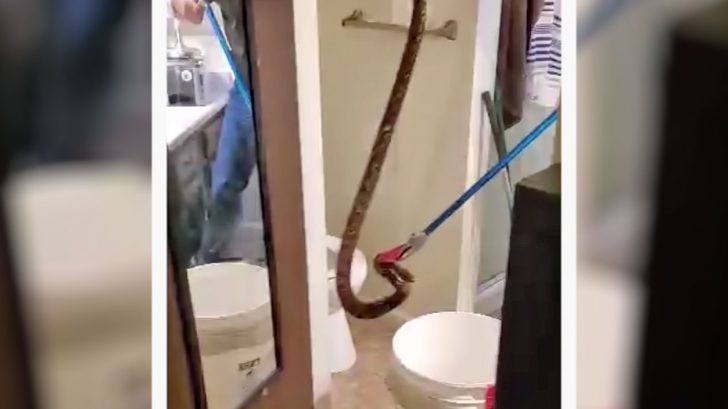 Friday morning brought an unusual and startling surprise for one particular family. On August 7, 2020 a couple from Elk Grove, California came face-to-face with a six-foot-long snake in their bathroom toilet.

The homeowner, Irma Zambrano recalled the event during a CNN interview.

“My husband before he leaves for work always uses the restroom. When he walked into the restroom and lifted the lid he saw a snake.That’s like the worst nightmare is something coming out of the toilet.”

Glenn Stough of Ramirez Rattlesnake Removal has fifteen years on the job removing snakes and other animals from people’s homes. According to him, he’s never seen anything like it.

“I went in the bathroom, lifted up the toilet seat. He’s strong, he gets big and he grabbed onto something, but he’s trying to pull me in with him. He was stronger than my tongs and I was about ready to grab him with my hands. I knew I had to get him out of there. Luckily he kind of froze up a little bit and I was able to suck him out of there.”

Once the snake was captured, Stough identified it as a boa constrictor which is non-native to California. The snake cannot be relocated in the area, so it was safely delivered to animal control.

For the whole story, watch the video below.

A California family found a six-foot long boa constrictor in their toilet.