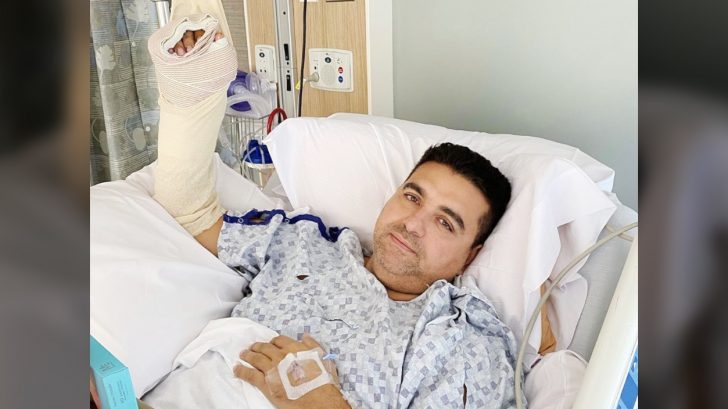 For over 10 years, Buddy Valastro has graced our television screens on the reality show Cake Boss. Valastro runs the famous family-run bakery Carlo’s Bake Shop along with his wife Lisa, and his siblings Maddalena, Grace, and Mary.

The show follows the family’s close relationships as well as Valastro’s insanely talented staff while they create over-the-top edible art in the form of cakes.

In a new Instagram post, the father of four revealed he had been involved in a “terrible accident.” He posted a photo in a hospital bed with his right hand wrapped up.

“I was involved in a terrible accident a few days ago…What do you think of my new accessory?” he wrote, along with the hashtags “#RecoveryJourney,” “#PositiveVibes,” and “IronFist.”

I was involved in a terrible accident a few days ago… ? What do you think of my new accessory? #recoveryjourney #positivevibes #ironfist #cakeboss #buddyvalastro

***The following information may be difficult for some readers***

His rep told PEOPLE that the celebrity chef was at home with his family, where they have a bowling alley in the house.

Valastro went to fix the bowling pinsetter, something he has done many times in the past, “but it turned into a terrible accident.”

“After trying to release the bowling pin from the cage mechanism, his right hand became lodged and compressed inside the unit,” the rep said. “Unable to remove his hand, he can see a 1-1/2″ metal rod slowly and repeatedly impale his hand three times between his ring finger and middle finger.”

Five minutes passed and he was unable to free himself, so his 16 and 13-year-old sons had “to cut through the metal rod and relieve [their] father from the machine” using a reciprocating saw.

Valastro has had two surgeries and is now recovering at home in New Jersey.

His rep added, “It will be an uphill battle as it’s Buddy’s dominant right hand and he will need prolonged recovery and therapy.”

Our thoughts and prayers are with Valastro during his recovery!