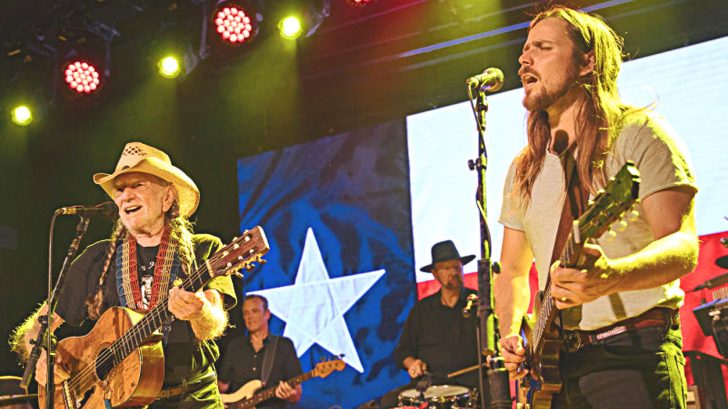 Willie Nelson‘s music has been passed on through generations, with parents teaching their children his songs, and those children going on to teach their own children.

But country fans aren’t the only ones that Willie’s career has influenced. Some of his own children have come to love music as well, and they have started singing careers of their own.

Out of all of his children, Willie’s son Lukas is perhaps the most famous. While his father is a country singer, Lukas has decided to forge his own path. He serves as the frontman of a rock group named Lukas Nelson & Promise of the Real, or POTR for short, which has performed as Neil Young’s backing band since 2015.

You can catch one of the group’s performances with Young in the following clip.

The group has been actively touring this summer, and recently had a gig in Amagansett, New York. But things didn’t exactly go according to plan after the band’s tour bus pulled up to the venue.

With just five minutes left before they were supposed to hit the stage, the door handle on POTR’s bus malfunctioned, leaving them trapped inside. Knowing they had to get off of the bus, and fast, Lukas came up with a creative (and extreme) solution.

Lukas managed to open a tiny window on the bus, which he exited by hanging out of head first. His buddies rushed to help him out, and the entire exit was detailed in a series of photos he later posted to Instagram.

While his method may have been unconventional, it worked. You know what they say, desperate times call for desperate measures.

Last night, literally 5 mins before our show at @talkhousehamptons , the door handle on the bus malfunctioned, forcing us to make a more unconventional exit and entrance to the building ?: @coreymccormickofficial

Hopefully POTR managed to get their bus fixed so their frontman doesn’t have to throw himself out of the window any more! That’s something we could totally picture Willie doing in his younger days, don’t you think?

See just how similar father and son truly are when you watch Willie and Lukas perform together in the video below. Lukas’ brother Micah is in the video too!