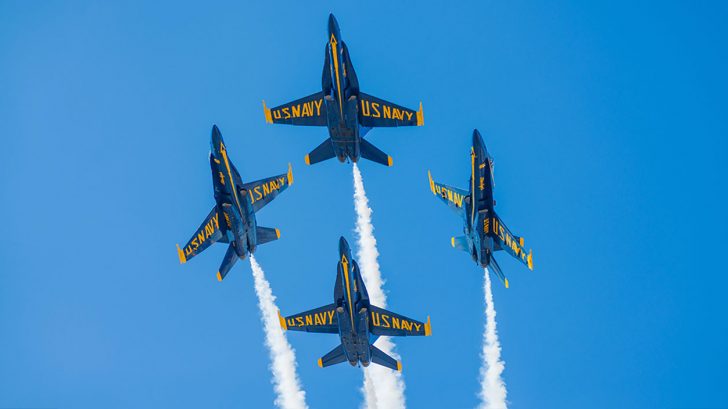 As the nation fights back against a pandemic, our health care workers shoulder a large portion of the battle.

During the difficult time, the Pentagon deployed the  U.S. Air Force’s Thunderbirds and the U.S. Navy’s Blue Angels to fly over a number of American cities to highlight national unity in the face of the COVID-19 pandemic. The Washington Post interviewed a Senior Military official who stated,

“This is just a sincere thank you. It’s one way to acknowledge those who are pitching in.”

The Thunderbirds posted on their official Twitter page after doing a flyover of major cities and medical facilities in Colorado,

“We salute Colorado’s healthcare workers and first responders who are at the forefront of our nation’s fight against COVID-19. They are an inspiration for the entire country during these challenging times and it was an honor to fly for them yesterday.”

We salute Colorado’s healthcare workers and first responders who are at the forefront of our nation’s fight against COVID-19. They are an inspiration for the entire country during these challenging times and it was an honor to fly for them yesterday. #AirForceSalutes pic.twitter.com/VpBRpl6fMu

Both the Thunderbirds and Blue Angels were originally founded to raise public interest in aviation, as well as boost the morale of troops.

We are grateful to all front line #COVID19 responders working around the nation! Since we can’t thank these heroes face-to-face, we’re going to show our support from a safe social distance.. with a flyover/salute over Las Vegas, Sat. @ 2:30 PST.#VegasGoesBlue #StayHomeForNevada pic.twitter.com/btls888kgI

The Blue Angels were established back in 1946 with the goal to showcase what our military men and women are capable of, and to set the standard for excellence. In 1953, just six years after the Air Force became an official separate branch of the military, the Thunderbirds were created with the same purpose in mind. Both are using their founding principals to unite Americans together during this difficult time.

A truly amazing sight to behold, the Thunderbirds and Blue Angels are famous for their high-speed acrobatics through the air. In April 2020, the Blue Angels announced the start of a weekly series which gives viewers a behind-the-scenes look at their various stunts and daily operations.

We are excited to present the premiere of our new weekly series, The Debrief, which gives you a behind-the-scenes look at our daily operations!https://t.co/7nzkxPGbnu

It is only fitting that a salute is given to our soldiers – the doctors, nurses, and countless medical staff who are on the front lines every day battling.

Watch the video below to see the flyover for “Operation America Strong” in Las Vegas, Nevada.