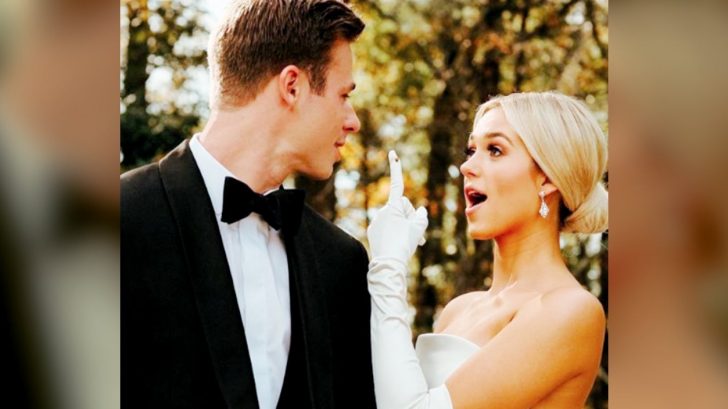 Sadie Robertson and her new husband, Christian Huff, are currently on their honeymoon. But that hasn’t stopped them from sharing a batch of new photos from their November 25th wedding.

Initially, the only photos from the couple’s wedding were shared by guests. Sadie and Christian waited a full day before they finally shared their own photos.

The photo Sadie posted was a stunning portrait of the newlyweds, with the simple caption, “forever, me and you.”

As for Christian, he shared a photo from what appears to be his and Sadie’s entrance into their reception, writing, “my bride,” in the caption.

forever, me and you♥️

This is something they confirmed while in the middle of their honeymoon. Both Sadie and Christian took to Instagram to share additional photos from their wedding day.

In Christian’s case, he posted a single, black and white shot of himself and his groomsmen. Sadie’s brothers, Will, John Luke, and Rowdy all appear in the group photo.

“love standing by these guys everyday in life but especially this one!” Christian wrote.

love standing by these guys everyday in life but especially this one! Thanks @theblacktux for making us look good!

As for Sadie, she shared not one, not two, but three new wedding photos!

Sadie’s pictures were all in color. The first picture shows Sadie alone as she looks to the side with a smile on her face. She is seen embracing Christian in the slideshow’s second photo, and the picture is sure to melt your heart.

The final photo is also adorable, as it shows Sadie and Christian in complete surprise as they admire a bug that on Sadie’s hand. It really stood out, since it landed on the fingertip of Sadie’s white glove!

In her caption, Sadie promised she will have plenty of wedding pictures to share in the future. “so many more pics and so many more words to come … now, back to my honeymoon,” she wrote.

A huge congratulations to Sadie and Christian on their marriage!

Join us in celebrating their union by watching their first dance as husband and wife in the video below. It was such a magical moment on an overall magical day.

Congratulations @christian_huff and @legitsadierob!! Beautiful couple. Beautiful night. Beautiful future in store. @lornabrittany and I were so honored to be a part of such a special day. So humbled that my song KNOWN could be the soundtrack to your first dance, a forever-memory. We are cheering for you both!! #huffdynasty #huffilyeverafter