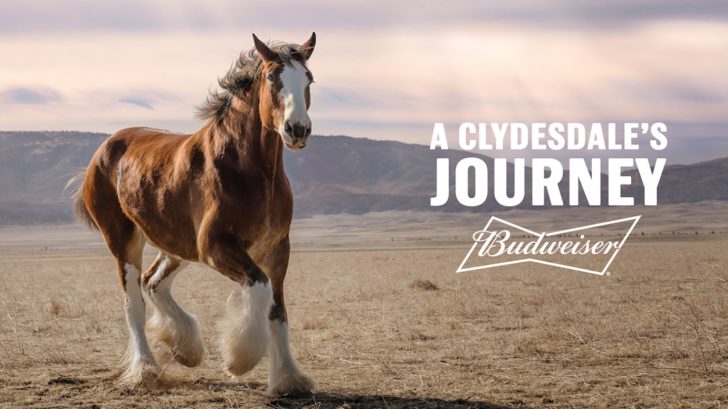 Budweiser says that during this year’s Super Bowl they have one message and one message only for America: “In the home of the brave, down never means out.”

The message was released on Wednesday, along with a minute-long video ad titled A Clydesdale’s Journey that will be played during the Super Bowl and reunites one of the brand’s favorite marketing tandems: The Clydesdale horse and the farm dog.

The commercial opens with a Clydesdale galloping at full speed across an open field with a farm dog watching as it makes its way to a barbwire fence. The horse tries to jump over a broken part of the fence but its leg gets caught and it takes a terrible fall to the dirt.

Unfortunately, the horse got injured during the incident. A veterinarian is next seen wrapping the horse’s leg as its handler stands by with a face full of worry.

The horse is then returned to the barn and is kept on a bed of hay laying on the ground for what seems like many days and nights. The handler and veterinarian still have a concerned look on their faces as the days pass.

The dog is seen sitting patiently by the horse until one day as the handler and the dog were getting in their truck to leave, the horse winnied and came walking out of the barn.

The Clydesdale takes off running again at full speed like it once did and the dog goes running after it. It’s a beautiful story of never going up.