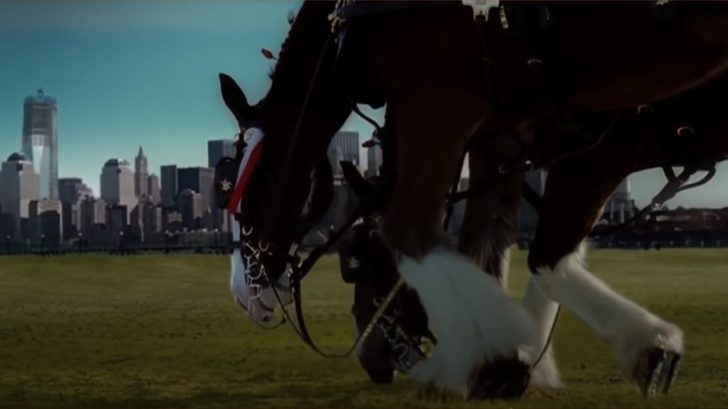 In 2002, Budweiser aired a meaningful Super Bowl commercial to pay homage to the victims of 9/11 and their families. This tribute commercial showed their majestic Budweiser Clydesdales bowing in tribute on the 10th anniversary with the NYC skyline and Statue of Liberty in the background.

Did you know? One of the most popular tributes to 9/11 was an AD featuring the Budweiser Clydesdale's, when the team of…

Posted by The SHOWER SHIRT for Chest Surgery Patients on Wednesday, September 11, 2019

The one-minute commercial shows the Clydesdales getting ready with their horse master, leaving the farm, and walking through the countrysides and cities. The beautiful horses grab attention everywhere they go, including from a barber in his shop.

The trip looked long and enduring but the horses were determined. They galloped across the Brooklyn Bridge and into a park with the NYC skyline and view of Manhattan behind them. It was spectacular.

After the Clydesdales looked in the direction of where the towers would be, they lifted up their left legs and lowered their heads to pay respect and remember the tragedy of 9/11.

This 9/11 tribute is seen by some as one of the best commercial contributes of all time. The beautiful horses and old-timey carriage bring back a nostalgic feeling of American tradition. At the end of the commercial three powerful words ran across the screen: “We’ll never forget”. Take a look a the Super Bowl commercial below.