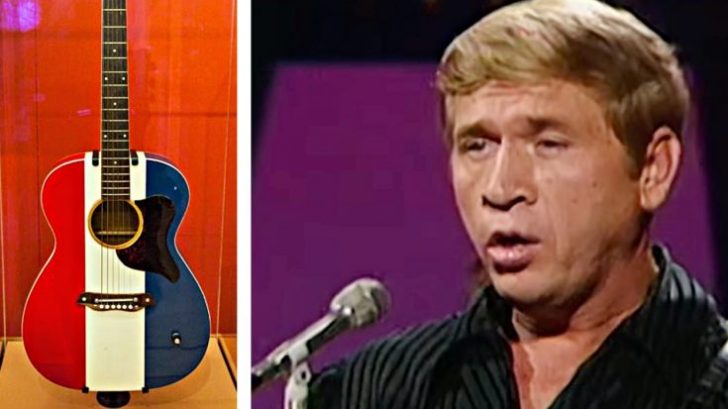 According to the Kern County Sheriff’s Office in Bakersfield, California, the stolen Buck Owens guitar from the U.S. Post Office on Minner Avenue has been returned.

Police said that officers, along with post office employees and U.S. postal inspectors all gathered to put the guitar back in its display on Thursday.

The guitar was stolen back in December and authorities said they were finally able to hunt down the guitar, starting with examining the surveillance video and then speaking with the public and informants.

The information gathered finally led the police to file a search warrant in Kern County Superior Court for a location at the Greenlawn cemetery on Jan. 8.

“It’s wonderful — people just don’t realize how important (it is for the guitar) to stay here,” city resident Leslie Echols told Bakersfield. “I was devastated when I heard about (the theft). How could someone do that?”

Matthew Norfleet, an inspector with the U.S. Postal Investigation Service said no charges were filed yet but they do have an ongoing investigation with suspects.

“The person who stole this guitar didn’t benefit from it — the feds are now after them,” Matthew said. “Obviously, (the suspects) didn’t have as many friends as they thought they did.”

The guitar was mostly intact, however, the shadowbox hosting the instrument was shattered and the post office was also damaged during the theft.

KCSO Detective Steven Davis said that they are looking to press federal charges, such as burglary, grand theft, and conspiracy against the perpetrator on the suspects.

According to the investigators, the suspects were also filmed stealing packages from the post office and will most likely be charged for that as well.