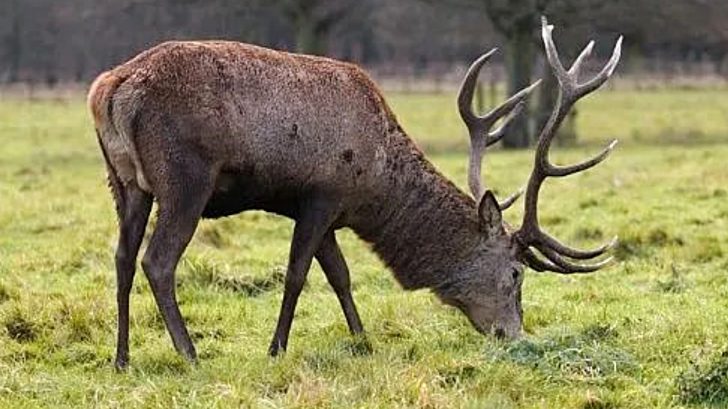 WARNING: Images Below May Be Too Graphic For Some Viewers

A 36-year-old man named Vincent Saubion almost got his face ripped off by a 330-pound deer during a hunting expedition in the southwest forest of Lesperon, France.

This all happened back in January but the story is just now getting attention in the media. Apparently the man was in close range of the wild deer when it noticed Vincent and tried to escape him. In doing so the deer charged straight towards him and hit him in the face with his antlers.

The collision left a large chunk of skin flapping down from his eye to his nose. It stunned Vincent for a moment and even though blood was pouring down from his face he said he wanted to continue hunting with his friends.“It felt like I was drunk, but it actually took half my face off,” Metro UK reported.

However, one of his friends wasn’t convinced that he was going to be alright and called over a firefighter who was hunting with them to perform first-aid on Vincent. The firefighter patched him up the best he could but Vincent’s injuries were so serious they decided to call a helicopter and airlifted him to the Pellegrin Hospital in Bordeaux to undergo immediate surgery.

The operation left him with 50 stitches and he says that he just feels grateful the deer was more fearful of him and wanted to run away rather than stand there and fight him. Fortunately, Vincent didn’t lose an eye or worse, his life. He says he’s lucky he hasn’t broken anything and still loves hunting. Vincent plans to return to the forest again to hunt.

Metro UK reported Vincent saying, “I am still crazy about hunting. I am very involved in the community, and have nothing but respect for the game and the owners who let us hunt on their grounds.”

Trail Camera Video Of Deer In France Below