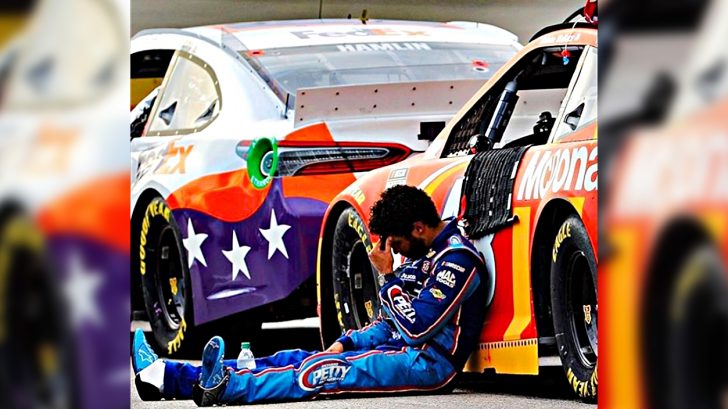 NASCAR Cup Series driver Bubba Wallace appeared to faint not once but twice after his race on Sunday (June 7.)

Bubba raced in the Folds of Honor QuikTrip 500 at the Atlanta Motor Speedway on Sunday, placing 21st in the race. It was 85 degrees and humid during the 500-mile-long race, which could have been a contributing factor to Bubba being fatigued and lightheaded afterward.

After the three-plus-hour long race, Bubba appeared to get off balance and light-headed as he was talking with members of his crew, before collapsing in their arms.

Shortly after he collapsed, Bubba was interviewed live on air by Jamie Little about the race and what happened after, saying:

“I don’t even know. Long race I guess…I stood up too fast…I got dizzy, got lightheaded. I feel fine now. Quick scare for everybody.”

He began talking about how he did during the race and the events beforehand when his words get jumbled; he appeared to become incoherent, stared out into space, and eventually lowered his head and closed his eyes.

Little recognized he wasn’t ok and quickly let his crew know as a member grabbed him and a voice could be heard saying, “where’s medical?”

Update on Bubba…Scary moment to witness in person. Gave us the ‘all good’ for the interview and then he was ‘out’. So glad he’s ok! https://t.co/ampkdHwY4Z

Bubba was taken to medical and later released. He tweeted that he was ok and playfully used a  “Call Of Duty” video game reference.

Got sent to the Gulag..

This wasn’t the first time Bubba had fainted during an interview. During his NASCAR Monster Energy Cup Series debut at Pocono in 2017, he was speaking to the media when all of a sudden his eyes rolled back a bit and reporters could tell something was wrong. Luckily, his team was right next to him and grabbed him before he could have fallen over. Just a few brief seconds later, and Wallace was on his way to the infield care center, and conscious.

This isn't the first time it's happened either…

We are glad to hear Bubba is ok! Scary moment for sure.

Watch the video of him collapsing in his crew member’s arms and then becoming incoherent in the middle of the interview below.