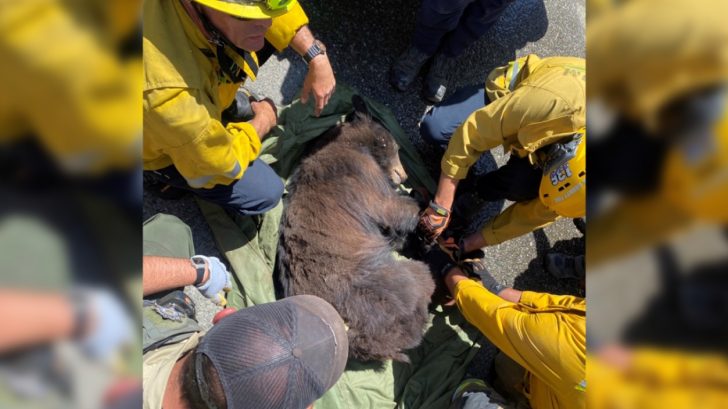 The Los Angeles County Fire Department released a public statement saying that a brown bear was rescued at an amusement park last week after it became trapped between two trailer containers on the property’s backlot.

The department said Engine 76 and Battalion 6 were sent out to the bear’s location after Six Flags Magic Mountain called and reported the animal being there.

According to the statement, “The crew was quickly joined by Heavy Rescue 103, USAR 136 [an LAFD task force], California Fish and Game, and the Los Angeles County Department of Animal Care and Control.”

They all worked diligently and patiently for the next several hours to get the bear freed from its predicament.

Animal control sedated the bear and then USAR 136 was able to successfully utilize their equipment to move one of the trailers so they could better reach the animal.

A photo taken by the department showed the bear lying on its side while officials surrounded it to place it in a zippered fabric tarp.

“The bear was then packaged for transport, so that it could be safely relocated by personnel from Fish and Game,” the statement concluded.

Six Flags Magic Mountain is in the Valencia area of Santa Clarita, California, about 25 miles north of Los Angeles, and is also home to many dangerous animals, such as coyotes, mountain lions, rattlesnakes, and bears.

The animals play a very important role in the area’s ecosystem so it’s also very important for the California Department of Fish and Wildlife to make sure both animals and humans exist together harmoniously.

Check out the 20 best rides at Six Flags Magic Mountain below!