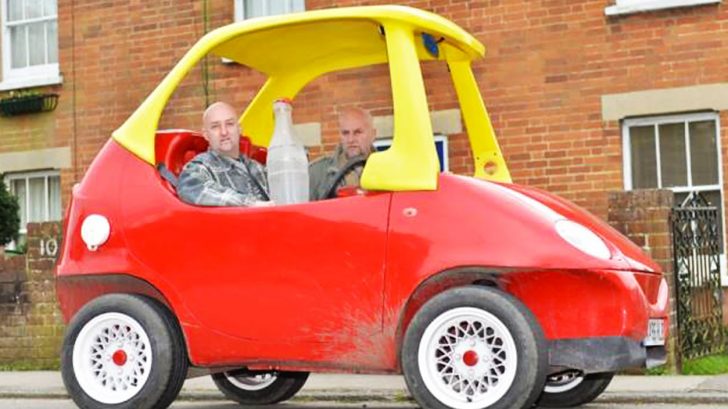 Geoff and John Bitmead are two brothers from the United Kingdom who have a taste for nostalgia. Most people can remember a time as a kid when they played in their Little Tikes car. It seemed like everyone had one and countless memories were made on these things.

The brothers loved the memories they created on their toy car so they decided to build an actual car of their own that would look exactly like the one they had as kids. They bought used an old Daewoo Matiz and equipped it with a gas tank, airbags, headlights, and mirrors. After their modifications, the newly transformed Cozy Coupe could reach a top speed of 70 miles per hour.

The adult-sized Little Tike cost over $5,000 to build and over 1,000 hours in labor over the course of 16 weeks. Once they finally finished building it, they traveled over 7,000 miles all over the country.

The specs of the real car are so close to the toy version that the “Big Tike” was even awarded a Guinness World Records certificate for being the largest Cozy Coupe.

The original version of the Little Tikes Cozy Coupe was released way back in 1979. In 1991, it sold over 500,000 units, surpassing the sales of Ford Taurus and Honda Accord.

See Geoff and John’s car in action below!