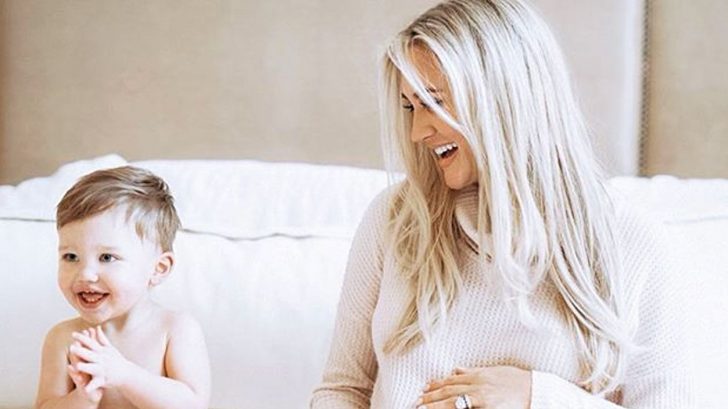 The Aldeans welcomed their newest member to the family on January 4th! At 7lbs, 12oz, their little ray of sunshine said hello to the world for the first time. While she was greeted by her loved ones, there was one little guy still waiting to give his new baby sister some love.

We welcomed our daughter Navy Rome into the world today at 12:45pm✨ 7lbs 12oz of pure preciousness? We love you so much baby girl!!

Brittany and Jason announced that baby number two was on the way back in July. With the sweetest photo of Memphis in a “Big Brother” shirt, there was no question he was ready to be the best big brother ever. Over the course of her pregnancy, baby Memphis grew up fast! He learned to walk, dance (to daddy’s music), and help mom with laundry.

Now, it looks like Memphis is ready to take on his big brother duties – starting with some kisses!

Brittany posted a sweet video of Memphis meeting Navy Rome for the very first time. With Jason holding him in his arms, he leans him forward so he can see her. Baby Navy is soundly asleep as her big brother shares a few kisses. Jason is guiding him through it, telling Memphis to give her some “sugar.”

In her pink beanie and onesie – Navy Rome looks happy as ever.

Luckily – thanks to his two big sisters – Memphis has learned a thing or two about being a brother already. Navy Rome is Jason’s youngest of three daughters. His two oldest, Kendyl and Keeley, couldn’t wait to give their baby brother all the sugar after he was born. Now, it’s his turn!

What a special day our baby sprinkle was? Navy Rome we can’t wait to meet you!

Watch the adorable video of Memphis meeting his baby sister, Navy Rome for the first time below.