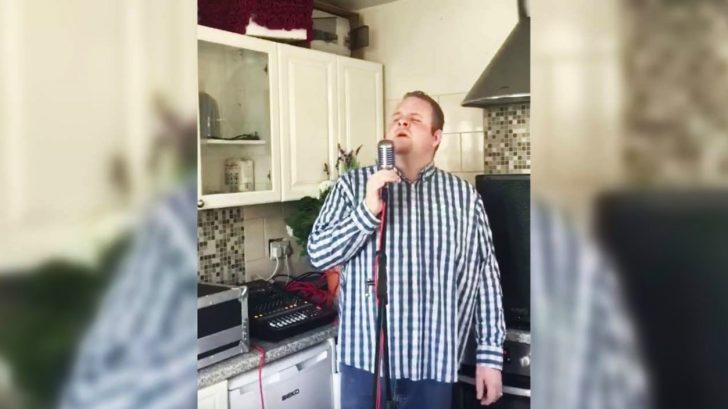 When you think of country music, you probably think of Americans, usually with a Southern accent, singing to fans across the nation. What you might not imagine is a British guy in London completely blowing the world away with twangy vocals and a pure country ballad.

Well, ladies and gentlemen – what we’ve just described is actually real and we’ve never heard anything like it.

Singing into a microphone in his kitchen, Bill Pidgley of the United Kingdom doesn’t look like he is going to have a country music voice. His thick, British accent doesn’t definitely doesn’t sound like he will! But once this guy opens his mouth to sing, your jaw will drop – trust us.

Pidgley decided to take on an extremely challenging song – both vocally and emotionally called
Don’t Tell Mam (I Was Drinking),” originally by Doug Stone.

The song is a harrowing tale of the pain felt by those involved in drinking and driving accidents. After rushing to help a man who wrecked his car, the stranger begs the man, “Don’t tell mama I was drinking/ Cause Lord knows that her soul would never rest/ Now I can’t leave this world with my mama thinking/ That I met the Lord with whiskey on my breath.”

Despite the emotionally-charged lyrics, Pidgley has gotten a lot of requests for the song. He gave his fans what they wanted and his performance was absolutely jaw-dropping. His talent was so undeniable that his videos made it all the way across the pond for us to enjoy!

Pidgley continues to sing locally in London, but we are hoping that one day he will perform a few songs for all his new fans in the United States! You can check out his full video below and let us know what song you think he should cover next in the comments!