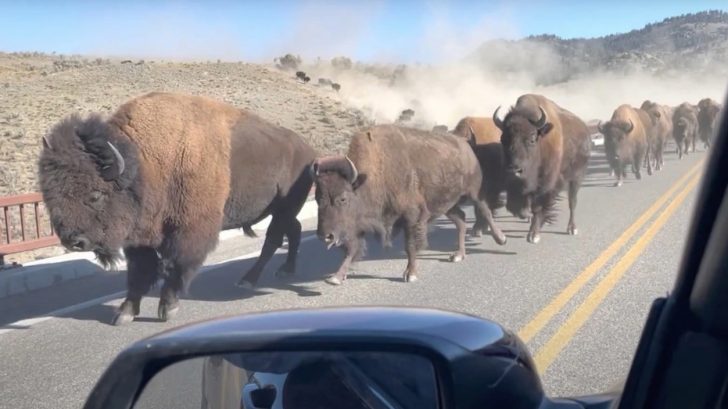 Johnnie Havard and his wife were visiting Yellowstone National Park when he captured a rather amazing moment on film showing the park’s bison up close and personal.

According to ViralHog, the couple was crossing a bridge that goes over the Lamar River when he noticed a cloud of dust and the herd of bison stopping traffic and proceeding to cross the bridge while they were on it.

Johnnie decided to pull out his phone and record the stampeding herd as they ran past his vehicle. He said that it was beautiful to watch and kind of scary all at the same time.

“We expected the herd to cross the road at the end of the bridge, but to our surprise, they turned onto the bridge and continued running directly toward our car. The whole event can be seen on the video taken with my iPhone,” Johnnie said.

The bridge was shaking and swaying back and forth, which can be seen in the video by the way the mirror was moving and vibrating as the herd passed by.

“The experience was rather scary since we were not at all sure that the bison would not run into our car but as can be seen in the video they veered to the right lane as they approached the car,” Johnnie said.

Watch The Footage Of The Bison Below