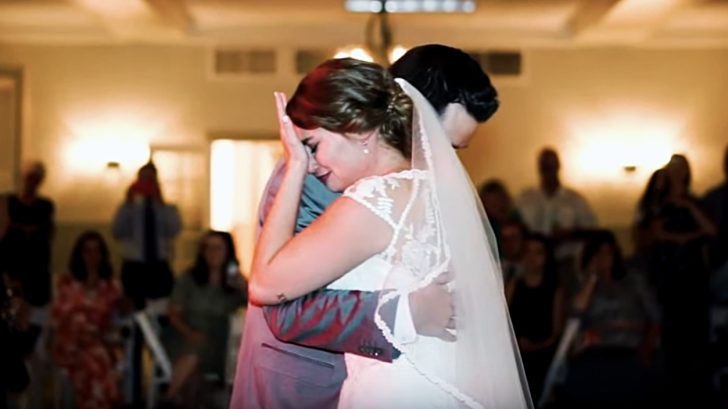 She immediately dropped her face into her hands when she heard his voice – realizing exactly what this meant and she was overwhelmed with emotion. But…this bride was crying happy tears.

In 2015, Kaley West Young and her five brothers had tragically lost their father, David West, due to a sudden and devastating medical issue that nobody knew he had. One of Kaley’s brothers, Kasey, and she were planning on having dinner with their father when they found him unresponsive on the bathroom floor – he had suffered from cardiomyopathy, a hereditary disease that had gone undiagnosed.

When it came time for her wedding, Kaley wouldn’t be able to do the traditional father-daughter dance she had always dreamed of, but because of her very special bond with her father – her brothers knew exactly how to make the moment something she would treasure forever.

Joking with their sister, the five boys told her they had something special up their sleeves for her big day, leading her off the trail so that the surprise would be as great as possible.

Choosing Michael Bolton’s stunning ballad “Fathers & Daughters” as the perfect song, the five loving siblings worked tirelessly to pair clips of their dad’s voice from home videos into the song – an idea that one of them had suggested early on, and all of them were immediately on board.

Kaley had already told her brothers she didn’t want a father-daughter dance since he wouldn’t be there, but she happily agreed to dance with each of them instead.

“You don’t want to have it, we won’t have it,” Dustin recalled to USA Today. “But we would love to dance with you.”

The song kicked off and Kaley began dancing with her brother Kasey. Just a few seconds into the song, their father’s voice came over the speakers from a home video clip and Kaley immediately recognized it.

“Hi Kaley! My name is Dave West and I’m Kaley’s dad – and I love her very much. 1800 times worth,” his voice said, bringing her to tears in her brother’s arms.

With each step she took, more of this beautiful and meaningful song played – and along with it, even more clips from home videos. Each of her brothers took a moment to dance with their sister on her big day and each of them cried along with her as they danced and remembered the special times they shared as a family.

“I was struggling to even stand,” she told the publication. “I was trying to keep myself composed, but honestly the only thing that I felt was complete love.”

Never expecting anyone but their family to pay attention to the video, once it picked up steam on social media they all have experienced an outpouring of love and kind messages from strangers all over the world! They are happy to share this special moment with folks and many people commented expressing how deeply it has affected them, too.

“It’s just a reminder to everyone that sees the video that family is most important,” Kaley said. “And there’s love in the world, and that’s the greatest gift we could ever have to share to the world because the world deserves it.”

Watch this beautiful moment Kaley shared with her brothers in memory of their beloved father below. Remember to keep the tissues handy – this one’s a tearjerker!

She could barely stand when she heard his voice on her wedding day.