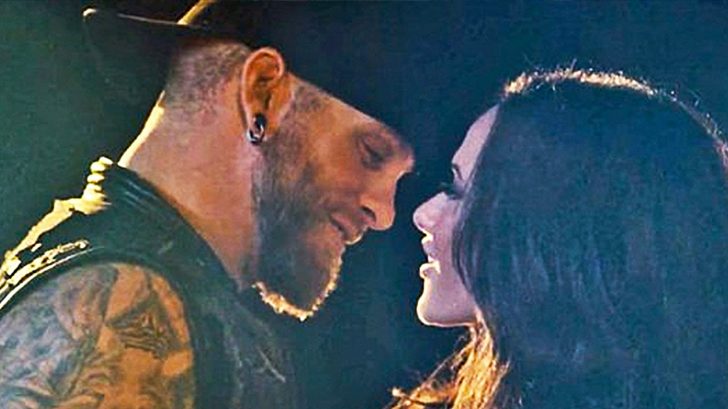 “Yeah, we’re done, moving on…but you can’t be too far gone,” he says in the song’s opening verse. This was Brantley Gilbert‘s first-ever duet with a female singer and the song hits you like a freight train of emotion – one you won’t be expecting.

Speaking from his past experiences, Gilbert says that writing the story of his breakup with his wife was so much better because he knew how it ended…

.@BrantleyGilbert has arrived at the #CMTawards!

Gilbert and his wife of three years, Amber Cochran, have a love story that is both unique and heartwarming. It has ups and downs, but so does every truly good story.

When the two were dating for some time, they ended up breaking up. There were many reasons, but one was his drinking. He quit that, fought to win her back – and now they have a beautiful family together.

But penning this soon-to-be-hit song, “What Happens In A Small Town,” required him to go back to that time and dredge up the pain and heartache from when they split.

Y’all…. I’ve been waiting so long to announce tell you my brand new single is available THIS FRIDAY…. ‘What Happens In A Small Town' with the incredible @lindsayell…. #WhatHappensInASmallTown pic.twitter.com/W0noS3LiJw

His first-ever duet with a female vocalist brings in the endless talent of rising country star, Lindsay Ell, and blends their vocals together like butter. Truly impressive, this gut-wrenching breakup song is a testament to their strengths as artists and musicians.

The song, which was written by Gilbert, Brock Berryhill, Josh Dunn, and Rhett Akins describe the chapter of his life in such detail that it paints a clear picture of what was going on.

“This song builds and burns,” Gilbert said according to MSN. “It really has that want for someone you can’t have, and having to live in all the places they are. I wanted to have someone on the record who could match those feelings, to really push the song. It’s not just any female singer who makes sense, and we knew that. But Lindsay is a whole other kind of artist, and she understands that power.”

“This is something really special” Couldn’t have said it better myself @lindsayell…. just one more day…. #WhatHappensInASmallTown pic.twitter.com/JO5lisF0Mn

Take a listen to Brantley Gilbert’s brand new song with Lindsay Ell, “What Happens In A Small Town” below and let us know what you think!