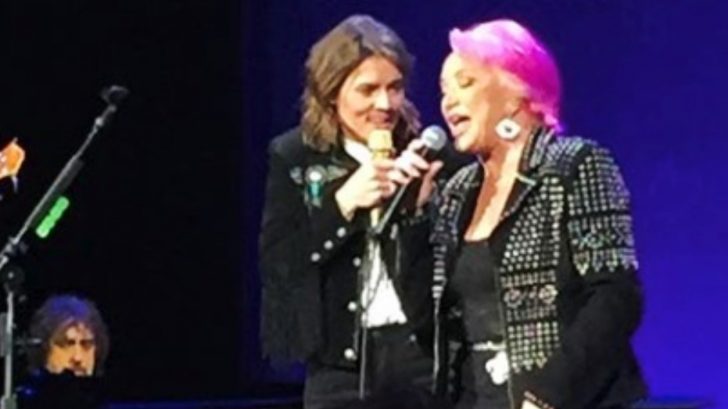 Ryman Auditorium was bustling with talent on April 3, 2019. The iconic venue was host to a benefit for Thistle Farms, which is a local nonprofit organization that benefits female survivors of abuse and trafficking.

3/29 5:00PM: UPDATE: Due to technical issues, the remaining Love on Fire tickets will be released Monday, April 1 at 11am. . . Love @brandicarlile & @john_prine as much as you love Thistle Farms? We've uncovered some extra tickets to the previously sold-out Love on Fire event that will be released this morning (Friday, 3/29) at 9am. See Brandi and John with @rubyamanfu, @shemekia.copeland, @levihummon, & @inversionsings at @theryman on April 3 as we share stories and songs of light, love, and second chances, benefitting Thistle Farms. Click the Love on Fire link in bio for all of the details-including how you could win two tickets and a $150 Thistle Farms gift. #LoveHeals. . . . . . #lovehealseverybody #brandicarlile #johnprine #rubyamanfu #shemekiacopeland #inversion #nashville #rymanauditorium #motherchurch #?on? #loveonfire

During Carlile’s set, she brought out a surprise guest – Tanya Tucker! The “Delta Dawn” singer was not billed so when she walked out on stage, everyone went nuts! During her introduction, Carlile called her “the great matriarch of country and western music.”

Carlile has always been vocal about her respect for the legend. During a sit down interview with actress Elizabeth Moss at SXSW in March, Carlile revealed that her favorite country song of all time is Tucker’s “Delta Dawn.”

“Tanya Tucker is punk rock. She’s had those moments in life and come through them…she’s probably one of my favorite country singers ever,” she said.

I knew my ears were ringin'! Thank you to Brandi Carlile and Elisabeth Moss for making a girl feel special. ?? #sxsw

The respect is mutual, seeing as Carlile co-produced Tucker’s upcoming album While I’m Living, along with Shooter Jennings. The two debuted the title track at Loretta Lynn’s All-Star Birthday Celebration on April 1, 2019.

Seeing as “Delta Dawn” is Carlile’s favorite song, it seemed fitting that they perform that one together. Both dressed in all black, Carlile told the audience at the benefit concert, “We’ve never never done this before!”

She counted them in, and they sang the opening lyrics in spine-tingling harmony. Before you knew it, the audience was on their feet and clapping along. By the end of the song, the whole Auditorium was standing, singing along, and clapping loudly. And to think, this was all a surprise!