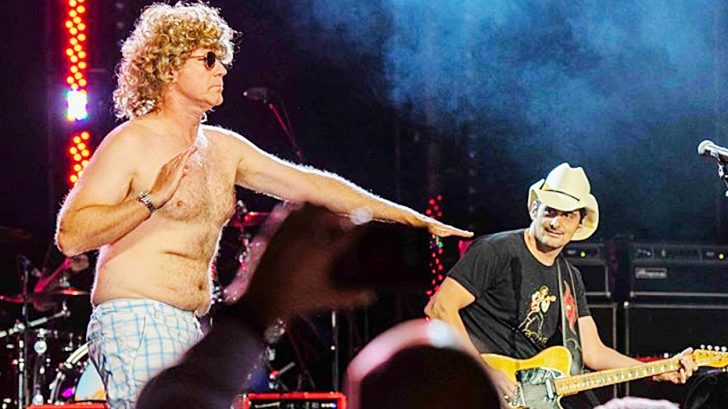 This beloved country star was performing at a benefit concert in Los Angeles’ Greek Theater this weekend when he got the most-unexpected surprise in the middle of his set!

Country music’s own longtime hitmaker, Brad Paisley, was helping to raise money at the benefit concert supporting Cancer for College – a charity that helps cancer survivors go to college by granting scholarships across the nation.

Paisley performed a number of songs including covers of Eric Clapton’s “Layla” (above) and Prince’s iconic hit, “Purple Rain.”

But, while he was stepping outside of his traditional comfort zone with these songs, something else came up that was hysterically unexpected – and had the entire crowd howling with laughter.

Sauntering on stage both shirtless and drunk, a man donning a curly blonde mullet screamed into the mic that he was Brad’s older brother, Gary Paisley.

“Last night, my older brother Gary Paisley made a rare appearance…he’s a little off,” Paisley wrote on social media following the show his “brother” crashed.

Brad’s brother showed up sans shirt and gripping a can of beer before taking over the stage and telling the crowd that even though he’s proud of all his little bro’s accomplishments – Brad “never lets him sing.”

As many suspected, the host of the event and ever-funny comedian Will Ferrell, was behind the whole getup and surprise stage show act!

Everyone was rolling with laughter by the end of his skit, and even Paisley’s wife commented on the performance, saying “this was INSANELY FUN!”

Check out Brad Paisley and his big brother “Gary” below, singing in what Brad calls his new “superband” The Red Hot Chilli-Paisleys-Pearl-Jams ‘n Roses!